What’s Jack up to? Poor Mr. Jack is a little under the weather. We’ll see how he fares today. It’s all about chillin’ today Jack.

So my first 2 reality shows were so sad lat night.

ANTM
Poor Marvita was out at the beginning. There was no mystery in the show. The DH said she was out-ski as soon as he saw her with the 40 ounce. Tsk, tsk. I still couldn’t help but feel sad for her and her very sad photo. I was hoping they would give me a top model twist and it would be Whitney gone at the end, but alas, no. 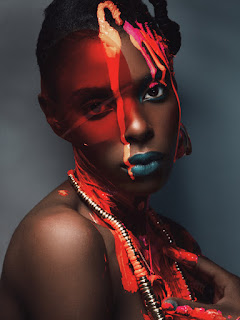 A few points: It is just me or is Dominique feeling a little Jade-esque?
Fatima? What up with the not shaving, gal? You knew Miss J would be all over that.
And who stole Lauren’s shoes? That poor girl can barely walk in shoes she knows. She’ll never be ale to break in another pair!

Then it was Survivor. Which I had forgotten was coming on but thankfully I taped it fifteen minutes into it. Poor Kathy. The woman had a full Survivor meltdown and left the show. it was all those times on Exile Island that wore her down. 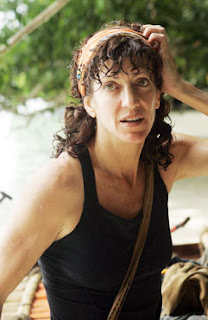 Then it came time for the deliberation and it was looking like Ozzy’s arrogance was getting the best of him. Half naked showers with random ladies won’t win you any point. Remember: Have Equipment Will Travel. But in the end it was Tracy. Ozzy is still running things or is it Cirie? 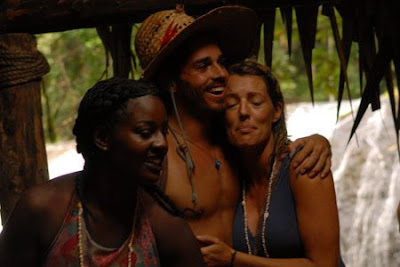 Then on to, wait for it… Top Chef.

What’s with Mr. Chill aka Spike stopping and listening to music? Work fool!

And Richard aka Mr. Smokey and the eucalyptus. How many times can he say, “molecular Gastronomy” in five seconds? Like fifty. We get it already Mr. Smokey. Yeech!

And Runaround Marc sweating out of the box and messing up with the bags. Ugh. High drama in the kitchen. Good thing he can cook even with mistakes. Go Curly! Immunity.

Can someone tell me why is Dale always mad, no matter if it’s rainy or sunny? But, I’m starting to like it. He’s just so dark.

Last thing on the quick fire, Andrew, can you can’t to five? Duh? Moving on.
Next up, Crazy zoo challenge. What?
Jennifer starts talking about butting heads with Zoi. My eyebrow raises, Joke’s too easy. I’ll leave it alone. You all get 5 seconds. tick-tock. tick- tock.
So the chefs had to come up with something using the diets of the animals they get assigned. Pretty cool except the girls who got the vegetarian diet wimped out and started adding meat? That doesn’t sound right to me. But it’s crab, not too bad.

Is it me or is Tom smiling more than ever this year. Did he get a raise or is he just really enjoying torturing the chefs?

Time is ticking and mistakes are flying we got bad mushrooms and soggy chips. Antonia trying quickly to step away from Valerie’s blini dish.

Surprise Surprise the winner for the challenge was wacky Andrew and his Glacier. If Dale could kill with his eyes watch out!

Back in deliberation it was a Dale/ Nikki smack-down. Could she see thought those glasses? Then it’s Stephanie against Valerie and Antonia throws Valerie under the bus. Ouch.

End the end it was adios to Valerie. Buh-Bye sweet chef. See ya.