What’s Jack up to? He’s starting to get back to himself and it back to bringing me his toys to play with at the most annoying times. Yay! Are you loving me again, Jack?

We interrupt this week’s RWA conference posts to talk Project Runway. It feels like home on a Wednesday night with Project runway. Yay. I’m a happy girl!
The show starts and Korto in not crying over anyone going home and Kenley is thrilled about immunity.
Sidebar: I have to say after seeing last week’s show I Terri should have won. Kenly’s dress was out there and different I wasn’t into the asymmetry of it. 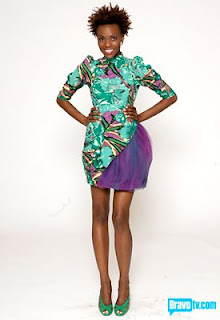 I thought Terri rocked it and should have won. The challenge was all about NY inspiration and her model screamed NY cool. 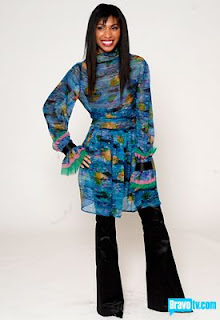 Now for this week’s field trip and Suede is loving it with his 3rd person craziness and Blayne is going though tan withdrawal which is getting kind of scary. They head to the Armory Track and Field center and are greeted by a skating Apolo Ohno who I half expect to break out in a dance. They are given an Olympic challenge and have to design a women’s wear outfit for the opening ceremony.

Stella is talking gladiator and leather and fur. Uh oh! Jarell is all about the hats and classics. Daniel is just confused.
Back in the city and Keith is a big fabric thief at Mood and Terri may have to smack him. Joe is doing a skort and want to win it for his girls and Blayne is moaning about is lack of tan and losing his ability to think or design or whatever he does. Apparently the tan is his special energy. Who knew?

Stella is doing her whole outfit in black for I guess the Olympic biker chick?
Keith let it out that he was a competitive gymnast as a young boy and the way he said it was somehow sad and so telling. Was there hazing?
Korto Goes into her past in Liberia and how America is the land of second chances and breaks all our hearts for a moment making the tanorexic seem so shallow.
Tim starts his walk through. Tim likes Joe. Blayne showed his pure idiocy by not knowing Sergeant Pepper. Can a boy get a reference and stop watching the WB and MTV? Please.
Daniel is unraveling. Jarell is doing Lucy Ricardo according to Tim not good.
For, Jennifer Tim said the word ‘matronly’. Eek!

Late at night Joe and Daniel got into a machine fight. Then Joe wants to get all mean about the amount of “queens” there. His word not mine. He’d better watch out. This is Project Runway and he still has to walk the streets and get a job in New York when it all over. Be smart Joe.
Day of the runway show and I have a feeling it is going to be a dozy. I can’t wait to see these babies go down the runway. Korto was right it is a whole history lesson about to walk down the runway. Heidi comes out wearing something short, black and tight. Yeah, I’m slow but picking up on the trend too.

Here are my thoughts as they came down the runway:
Korto-likie very much
Suede-like but not practical
Kellie-question mark for me
Joe-like very USA slightly too literal?

Jerell Crazy, Lucy is right. Cutness though in its own nutty way. Not Olympics at all.

Kenley-Cute dress but not Olympics

It seems the judges agree with me in most cases. Poor Daniel who has turned temporally colorblind is teary. Now can we talk for a moment about Jerell’s hat? Not the hat he made for his model but the crazy hat he was wearing? What was with that? Too funny.

My top three Terri, Korto, Joe
Bottom three: Daniel, Jerell and Jennifer. Me and the judges are totally in sync tonight. Great line of the night came from Michael Kors about Daniel’s dress. “If your sport is drinking it’s a good dress.”
The winner is… Korto! 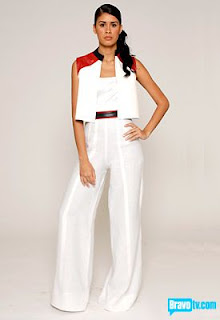 And out this week is… Jennifer. Buh- Buy Jennifer. Tea outfits don’t work for the Olympics. 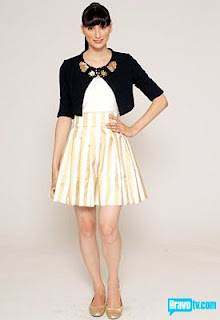 As for Shear Genus, No big post for me. Just know that show is crazy. Why are they putting molasses and squid and peanut butter in people’s hair and making them look ridiculous. Once again remind me NEVER to go on that show. You know I do crazy crap like that. Now they are making the stylists cut dog’s hair to match their owners. What? Now you know I love Jack but I so am so not taking him into my stylist for a haircut. She would smack me quick and send me packing and rightly so. Pla-ease!
In the end the winner was Dee and she did a great job with what she had to work with and the loser was Nekisa who had to go home some day. Why not today?