What’s Jack up to? As I write this he’s snuggled up on his bed sleeping like a little sweetheart. If only.

So, The Bachelorette came on last night. You did watch, didn’t you? The show starts with a recap of how DeAnna’s heart was broken last season by Brad the cad. 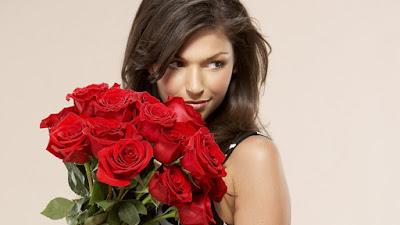 Then we get into this season’s guys. There were some Freaks and some Geeks. I could have done without seeing guys shaving their own chest hair thanks or the oyster farmer talking about a pearl necklace. I just don’t want to go there thank you very much.
But it didn’t matter I was sucked in with the handsome math teacher and the motorcycle riding real estate attorney who got the first impression rose. It was so much fun watching guys fight for time, making fools of themselves and also being vulnerable.
One guy, a chef, decided to start cooking in the middle of the party. A crab martini. Sounds like a winner. Hey does he work at Legal Seafood? Can he get her in without the hour wait?
Then DeAnna brings out her good looking girlfriend as a distraction and a way to see who is really into her or who would be into just any pretty girl. I suspect some may be into just any pretty girl. Especially the one that asked her to sit on his lap!
The night goes on and just as the producers want the liquor keeps flowing. Finally, men start to strip and jump into cold pools, there’s talk of shrinkage and they have a right good show.
I don’t know about you but I’ll be watching this season. What about you? Got to see the “amazing connections” and the tears in the limo. Hey we almost got some tears on this show. There was howling. I kid you not.
On another note it was the Finals for Dancing With The Stars. Any Predictions? I thought Kristi was flawless but my heart and I know lots of hearts are with Jason all the way.
Best,
Kwana