What’s Jack up to? Jack is recuperating from his exciting Easter celebrations. What a day he had!

While we were at church I had the foresight to move the plate of chocolates off the kitchen table but left the hard boiled eggs surely they were safe. Not. 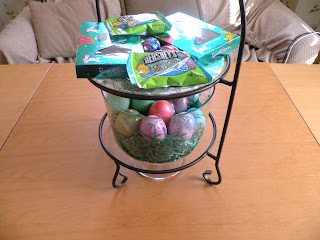 We get home a few hours later to terrible eggy smell. Jack had climbed on the table took a couple of eggs and, I kid you not, peeled them, and ate the eggs. He left the peelings on the couch. What is with that dog? I swear to you, one of the eggs he ate was the one I made for him that said “Good Dog” and had his little drawing. Jokes on me! 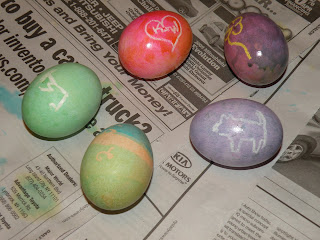 Then on the way down to Harlem and Nana’s house “she just had to have him over for Easter.” He would not sit on my lap. Whining and crying. Would not stop. I wondered why.
My DH said let him go.
What? Why?
Just let him go.
Whatever.
Look. 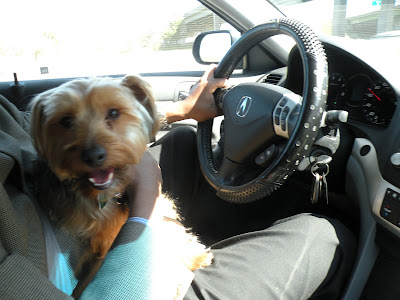 Spoiled dog. This is why I can’t do a thing with him.
Note. When he’s with me, he’s much more well behaved (sort of). I do not condone this bad behavior at all.

At Nana’s he ate anything and everything. Knocked over suspicious drinks and lapped them up. Did the dog come home drunk off daiquiris? I don’t know. Just crazy. Well, Jack had quite a time.

I hope you had a wonderful weekend. I could gripe like crazy about all the mishaps with mine but why? I’ll save it for a rainy day. Or not.