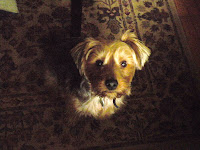 What’s Jack up to? Jack is being silly tonight. Hiding under the bed and not wanting to come out. He’s just looking at me like I’m the nutty one. I’m not into begging you, Jack. I’m way to tired for games, Dude you’ve got to go.
Top Chef is back. Another warning. Spoiler ahead….. Are you ready? Okay? Go….
It nice to get into routine again. Some Cheftestants are nervous, some in a bad mood, some feeling awesome. To each his own.

Padma is with French Chef Jean Christophe Novelli and the Diet Dr. Pepper Quick fire Challenge (say that three times fast) is a sugar-free dessert challenge. After the mad cooking scramble the plates look beautiful. But Christophe is. Everything is “interesting” meaning “it sucks” in his book and can’t compete with his too sexy for his search look.
There are lots he doesn’t like but in the end the winner is Radhika. And she gets immunity.

Now Padma announces Toby Young is the new judge taking over for Gail for the rest of the season. Bye Gail you will be missed. Is this what happens when one gets married?
Commercial over and Tom is in the house to give a talk about Toby and the next challenge it will be a blind tasting and there will be 2 chefs eliminated. Wow. Way to deliver good news Tom.

There are two groups A and B.
Group A is up First and at Whole Foods. There is the usual mad shopping and second guessing. Then back in the kitchen a bit of chaos ensues. Fabio has serious lamb trouble and can’t believe Jamie is doing scallops again. He announces the show I not called Top Scallop. So funny.

Time for service and the other chefs will judge their competitors food. Ouch. Nice twist TS.
Radhika’s crab soup is a downer.
Hosea’s vegetables upstaged the fish
Jamie’s scallops were finally good.
Fabio’s lamb was undercooked but his pasta is good.
Eugene dish is called the bland leading the bland
Melissa’s tacos are called fishy and Toby says it tastes like Cat food. Eek! That’s never good.

Group B is now in the kitchen and they know who they are cooking for and what to expect. They are cooking hard.
Araine’s Pan seared skate wing- a hit
Carla’s risotto with scallops- not good
Stefan-Duck Tom likie and Stefan has an orgasm
Jeff-Tom doesn’t time and Toby Loved
Leah-a toss up. Funny I forgot she was here this show.
So its team B that wins hands down.
Tops are Ariane, Stefan and Jamie.
Stefan modest as always comes out not with thanks, but with “it was a great dish.”
Jamie is thrilled to have cooked a good scallop.
Ariane was pleased. She is clearly more modest than Stefan.
The winner is…Jamie. No longer a bridesmaid. Da-Da-Da-Dum…

From the Not So Glad Room she calls back: Melissa, Eugene and Carla.
Carla admits she was not happy with her dish and is not surprised she is there. She talks about how she could have fixed it. Smart lady. Don’t be fooled.
Melissa talks about enjoying the critique. She gets smacked around a bit more.
Eugene talks about how he likes taking risks, but Toby says it lacks punch. Eugene tries to talks his way back in.
All three chefs try and plead their case a bit more.

But going home is…Melissa and Eugene. Carla lives to cook another day.