Top Chef begins and Ariane feels great. Winning is like that.

The rest of the chefs not feeling so great. That’s what losing feels like.

Suddenly the sad economy shows up in a blatant sidekick commercial with Hosea. Subtle.
In the kitchen the quick fire is to make a holiday meal with one pot and the surprise judge is Martha Stewart! Boots start quaking. Martha says, “make it simple but not too simple,” quoting Einstein. Ok Martha. 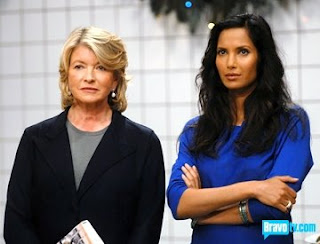 The chefs get cooking and Ariane and Jamie are now BFF’s tasting each other’s food despite Ariane’s constant wins. How long you gonna keep trusting that, Jamie?
Time for Martha to judge and she’s is judging tough. You can’t tell what she’s thinking as she walks by. She does like Hosea’s paella though and says so. For Jeff and uses the word pungent. Not good. Ariane gets and excellent and Carla a tasty. Fabio just a thank you.
No good were Jeff, Eugene and Fabio. Poor boys. Fabio wants to bust a vein.

Tops are Hosea, Jamie and Ariane. Uh-oh these two again. Jamie is nervous. The winner is Ariane. Again!! Jamie stop letting her taste your food already!!! It’s the kiss of death.
Now the elimination challenge which is catering a party for amFar with 300 guests. In comes the Harlem Gospel Choir good music but totally confusing to the chefs. The chefs draw knives. With numbers and the choir sings The 12 Days of Christmas which is the inspiration for their dishes.
In Whole Foods some of the chefs are panicking over their themes. Poor Fabio with his ladies dancing. No luck of the draw for this guy.
Back in the kitchen the chefs are working harder than ever to get everything done and packing it all in the fridge at the end of the night.
In the morning they all notice that one of the fridges were left open and the food has gone bad. Are you telling me no producer saw that? I’m thinking a twist was needed.
Other chefs pitch in to help Hosea and Radhika who were most effected with prep and they pull food from the sky. It’s the Christmas in July miracle. I’m not buying it.
At the event Natasha Richardson does the intro and Stefan is in love. Service begins.
Stefan’s Chicken pot pie is a hit.
Radhika’s dish does well. Indian spices again. Just embrase who you are already and go with it girl.
Carla is star struck but doesn’t do well.
Eugene is story telling. Blah, blah, blah. It’s a bust.
Fabio has dancing crab cakes and they flops.
Jamie is going with the scallops again. It’s bad. One man says slimy and Michelle Bernstein who is also judging is not happy with anything and boy is she vocal. A real little Miss Sunshine I tell ya. 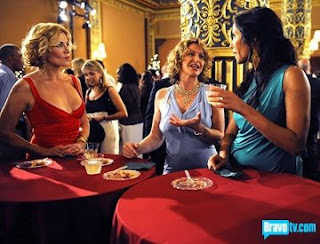 Melissa ,another loser. Leah not a winner either.
Ariane- deviled eggs. A classic. Tom is not impressed. Me neither. Natasha likes them. Tom shrugs.
Hosea a winner with his pork.
Jeff’s seared cheese a winner. How do you do that to cheese? I’d burn it.

Back at the judges table the tops are:
Radhika, Hosea, Jeff and Stefan. Looks like a tragedy turned into a triumph for Radhika and Hosea. Thanks Father Christmas in July.
The winner is Hosea.

Now for the bottom chefs: Eugene, Melissa and Jamie. Aww poor Jamie.
First they jump on Jamie about the temperature of her scallops.
Next is Melissa and the mouthful of cheese she made.
Now Eugene and poor seasoning. Eugene is standing by his dish. Uh-oh Eugene. You are not gonna win this fight.
The judges deliberate and they are not happy with most of the chefs. Tom is upset and wants to talk with them all about stepping up their games. I have a feeling Ariane’s wonderful Deviled eggs did him in.
Tom walks into The Not So Glad room and reads them the riot act. I was right. The Deviled egg come up!
The shocker to me is no one goes home tonight. He calls it a holiday gift. Yeah right. In July.
Best,
Kwana