What’s Jack up to? I’m afraid I’ll not have Jack calmed down until the Dear Twins are back in school. Jack is having a fine time chasing the DD around the house and snapping at her toes today. When he’s not doing that he’s roughhousing with the DS. No sweet little lap dog is he.

The DNC has begun and as I thought I’d be, I was riveted. The first night did not disappoint with Michelle Obama giving the keynote speech. I don’t think a potential first lady has given a keynote speech at a national convention so that in itself is historic, but besides that the fact that it was a Black woman giving the speech made it that much more so.

I didn’t expect to be as emotionally moved as I was, but there you have it. I could not take the smile from my face or account for the great sense of pride that I felt for women, African-Americans, my children and even my country. Count me as one of those teary eyed Black women at the end of the speech. Could we actually be here in 2008? Finally. It was a wonderful heartfelt speech that showed her heart and her fabulous mind. That Barack is a lucky man. Must be some good judgement there to choose Michelle. I say the more women in politics the better! 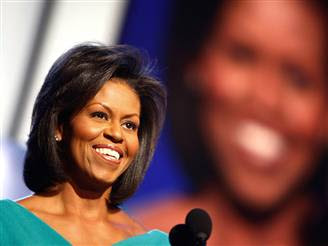