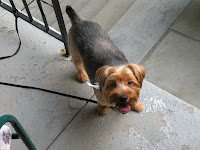 What’s Jack up to? Oh, that Jack was really naughty yesterday. Just when I said he was being nice too. The DD let him off his leash for a second to switch leashes to take him for a walk and he took off running up the block after two much larger dogs that went by a few minutes before. Darn Jack. They could have taken his head off. I told you he had a Napoleon complex. Luckily, they just laughed at the little dog running up to them talking trash. Whew!
So, did you watch? I sure did!

Last night I watched Barack Obama accept the nomination for President of The United States along with Nana and my fourteen year old African-American DD (dear daughter) and DS (dear son). I could not lose my smile. What a proud night! Sadly, the DH was still away on business, but called us to show his spirit.

It was so wonderful watching it with my grandmother who admitted that she never thought she would get to see Black man come this close to the presidency in her lifetime. She cried with happiness at being able to see it with her great-grandchildren. I hope that they realize just how remarkable and significant it is. They are now living in a new age. My two babies who share a birthday with Doctor Martin Luther King are a big step closer to his Dream. Our Dream.

photos from cnn, msnbc and yahoo

The speech was amazing. I heard it called by some hard nosed commentators a symphony. I’ll agree. One of my favorite lines of the night was when Barack said, “change doesn’t come from Washington, it comes to Washington.” I hear that. My bag is packed. Let’s go! 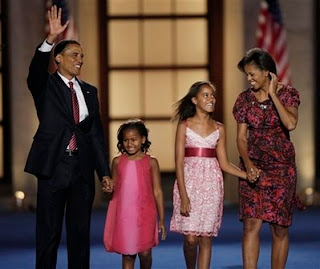 I don’t know how the other party will respond next week. But Barack has laid it all out tonight.