What’s Jack up to? He’s just being Jack. Lately he’s been hiding out in the hall closet with the shoes and boots. I keep forgetting and closing the door on him all the way. Sorry, Jack.

It was quite a shocker on America’s Next Top Model last night, but first off what is up with Lauren and the crazy outbursts? That girl is needing a muzzle.

I have to give props this week to Stacy Ann for being smart with the good Sprint shout out and getting premium camera time and good for her winning the challenge. Go Stacy Anne! I also have to say I wasn’t in love with the photos this week and in a true shocker, well, not so much. Claire was ousted. I thought it would have been and should have been Lauren. Oh well.

Buh-Bye Claire. No more CoverGirl of the week for you. 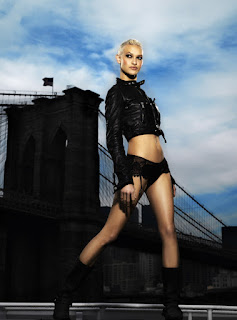 This week’s quickfire was with guest Daniel Boulud and was all about technique and making a beautiful vegetable plate. Uh-oh all you butter fingers and as for you Richard and Ryan (who I suspect was fired) Daniel said his past experiences with them would not effect him. We’ll see…

Sidebar: How many hats did Spike bring? Does he secretly have something going on with Ricky from Project Runway?

Quickfire judging Dale was impressive and scary too.
Richard’s a suck up. Surprise. Wipe your nose.
Spike was nice, despite the hat Hmm….

The winner is….. Scary Dale with the manic eyes and full zipper velour jogging jacket. Yay! He’ll be around another week.

Now the elimination challenge. A dinner inspired by your favorite movie. Sounds like a fun dress- party. Wouldn’t it be great to do that with Pride and Prejudice, or Rocky Horror or Mahogany all could have good food and fun clothes. What movie would you choose?

Richard, Dale and Andrew are doing Willy Wonka. Andrew no acting, please. This is not Mars 2112. Just stop. Tom will not stand for it. Back in the kitchen Richard’s smoker breaks. I’m so happy. I’m mean, right?

Did Spike Say Good Morning Vietnam? What? Not a favorite movie of mine and you can’t really dress to it, but make it good Manuel, please don’t pull out an accent or I may have to smack you.

Jen and Nikki- Il Postino- Good Choice but Nikki need to chill with the Italian. The judges are going to get tired of her with that.

Zoi and Antonia- Talk to Her good too. Spanish film. good stuff to work with.

Mark and Ryan to ding bats with no knowledge of cinema decided on the Christmas story. Hmm…

Verdict-Hey Ted liked it. Why am I surprised? Ryan just does not impress me.

Lisa and Stephanie get the 6th course and decide to do beef? Who wants beef for a 6th course? Who? Unless it’s a 6 am after the club course. Although I’ll agree that Top Secret is a super Funny movie and probably Val Kilmer’s best. At least they added apples so it’s not all savory.

The winners are announced and there are man hugs all around even with the women. The final winner is…Fauxhawk Richard. Man! And even without a smoker. Nobodies happy. Ugh!

Losers walk on in. Spike has on another fedora! Mustard yellow. Ugh again! Manuel you are with a fedora wearing mess. Get a backbone, man.
Antonia and Zoi look like they want to cry. Zoi is whining too much in the Gladroom. I’m afraid she may go. Tick Tock….

Commercial over. Wow! I was fooled again. Zoi is safe despite the whining. Fedora is in and Manuel is out. Buh-Bye, Manuel.