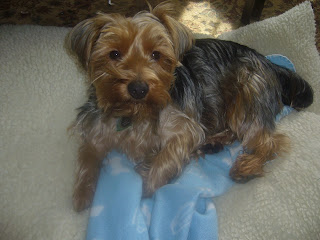 What’s Jack up to? He’s made a new friend with the sweet Fedex Lady. She got down to his level and appealed to his vanity telling him how handsome he was. Poor lady, never look Jack in the eyes or you’ll be trapped in his web.
Here is a photo of Jack chilling on his bed in front of the fireplace. He’s still attached to the blanket I got him when I gave him when we first got him at 8 weeks. Don’t let the cuteness fool you. He’s no doubt waiting until I walk away so he can sneak back up on the couch where he’ll really sleep. Do you think you’re fooling me, Jack? Enjoy the photo Mary-Laure! 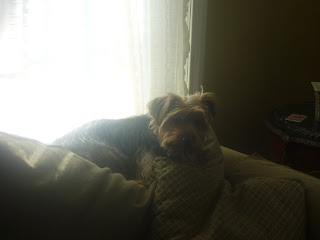 Survivor was fun as usual. How funny was it when James came up with the answer to the puzzle and he was like, “come on guys if I can come up with it!” Too cute. James even surprising himself by realizing he’s more then just amazing pecs.

Poor, Chet just sitting so silently waiting for it all to go down. Did he speak up once for himself? Have you ever seen a sadder face? The poor man can’t wait for a shower and shave. He just wants to go home.

Then out of nowhere his shower was snatched from him when Mikey B got the boot. I’m not sure it was a good move for winning challenges but that Joel is pretty cagey. E-VIL.
Best,
Kwana