The big day has finally arrived and Book #3 in my Unconventional Brides Series:

THE BETTING VOW is here! 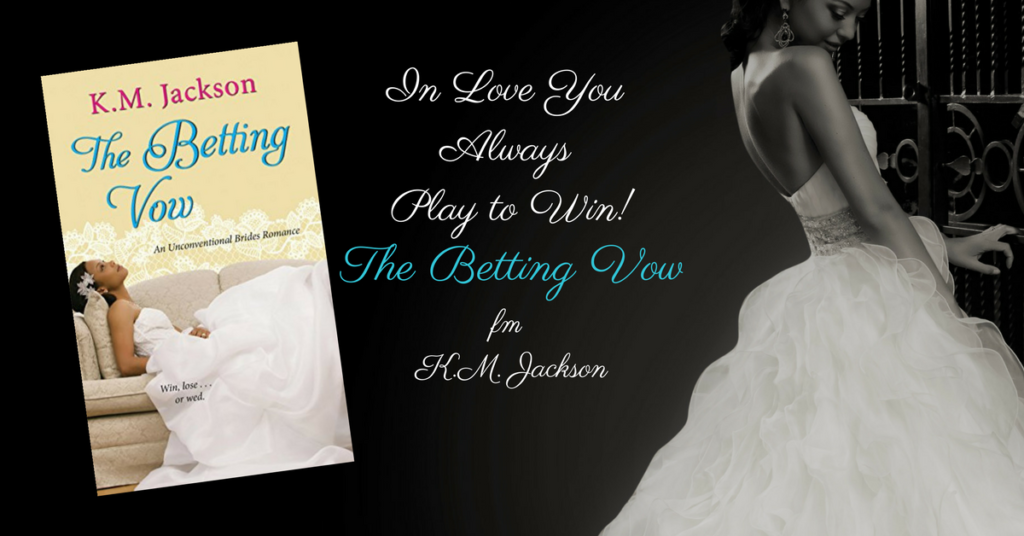 Leila Darling is past done with the supermodel thing, especially the mega-parties and high-profile flings that have done nothing but leave her alone and jaded. She’s got the talent to be a serious actress, but the industry sees her as a high-maintenance, impulsive party girl with a reputation for leaving men in the dust—especially TV producer Carter Bain.

Carter’s had his eye on Leila for years, so when a bet gives him a chance to get close to her, he accepts. With the goal of getting Leila the image makeover she needs and Carter the star he desires, the game is on. Get married and stay married for six months. If Leila lasts, she gets her pick of his A-list roles. If Carter wins, she’ll take the hot sidekick part he’s offered.

But as their “I do” turns up all kinds of heat, Leila and Carter find they have more in common than they ever imagined. Are these two prepared to put business aside and surrender the ultimate prize, their hearts?

Order your copy of THE BETTING VOW at your favorite retailer: 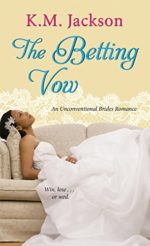 And now here is a sneak peek from Chapter One of THE BETTING VOW:

Balancing on the hood of a sports car while slickly oiled up was a lot harder than most people imagined. Add to that doing it one-handed, because you’re holding on to a fully loaded burger. Plus, you are in a bikini and are wearing six-inch stilettos. Well, then, you’ve got yourself a straight-up high-wire act.

Leila Darling tried her best to suck in her stomach, push out her behind, while simultaneously “making love” to the camera by puffing out her lips into a sultry, come-hither purse. She narrowed her eyes ever so slightly, as if extending a welcome invitation to wanton sex, while still appearing approachable with her version of the ever popular smize. Why it took this much sex to sell a hamburger still baffled her, but hers was not to reason why, since she was getting paid a small ransom to sit on the shiny car, be extra shiny herself, and make the Barn Burger the most lusted-after burger in fast-food history.

“Give me more. Give me more!” yelled Matteo, the famed photographer, fighting to be heard over the blaring bass of the heart-thumping rock music in the studio. If you could call the rented garage space in a rather sketchy part of East LA a studio. The tips of Matteo’s dark hair, what little he had left, were bleached and spiked so that they stood up at odd angles, and he wore an excessive amount of kohl around his eyes, making his deep bags, which revealed age, all the more pronounced.

“That’s right, Leila. Just like that. Oh, darling, you are selling it. Those eyes, those breasts . . . I’m getting hungry just watching you. You’re a sexual beast, darling!”

Leila pushed back a sneer at the way the word darling rolled off his tongue. Though it was her last name, in her case the word could be used as a proper noun, an adjective, or sadly, as of late, a verb. “Pulling a darling” was used for all sorts of things, and none of them good. Such as wild clubbing until the wee hours of the morning. Though, for the life of her, Leila didn’t understand what was wrong with blowing off a bit of steam, throwing fits on sets, since in Leila’s eyes, demanding respect was essential in her business. But worst, in her eyes, was that now— thanks to her ex, well, her third ex-fiancé, Miles G, and that crappy song of his, his hit “Darling Leila”—“pulling a darling” was synonymous with being a man-eater who used men, made them fall in love you, but never committed to them. Of course, it didn’t matter that in all her terminal relationships, it was the guys who’d failed her, making promises they ultimately had no intentions of keeping. Giving her perfectly valid reasons to bail on the so-called relationships.

So today, with Leila’s nerves already frayed, Matteo’s use of the word darling slid over Leila in a way that was too slimy and too personal and had her questioning his usage altogether. In the end, the sneer won out, and Leila went with it, her top lip curling as she looked at the photographer. Besides, the “sexual beast” comment had got to her, too. Especially now, when Leila considered herself in a career transition. She couldn’t just let a comment like that go unchecked.

Sure, she knew she should be happy and feel accomplished as one of the few African American top models in the business, though her current case of burger hood dwelling would bring a question to that. Still, most would think Leila had it all and was living on top, but in reality, she felt something was sorely lacking. Respect. Leila wanted so very much to be seen as something more than a sexy body that could sell anything, be it fast food or French couture.

Leila inwardly sighed as she recalled, while balancing herself precariously, one leg cocked up, the other pushing hard into the hood of the sports car, that a little over a month ago she’d been in Cannes, being celebrated as a breakout star in a less than breakout movie. Sure, she might have had only a few actual lines in the movie, and yes, she’d been brought on for her looks. However, she’d taken that part and run, showing she had chops, and for that she’d been rewarded for something besides the way she filled out a bikini top. Leila wanted more of that.

But here she was, back home and back to the same grind. Stand. Sit. Turn this way. Tilt that way. Was it any wonder she was on edge? Add to it the fact that taking an early flight back from Cannes had resulted in the demise of yet another high-profile relationship. Leila was officially done with her life as usual.

“Now take a bite. We want to see you eat it,” Matteo said, his voice piercing Leila’s musings and pinging her nerve endings with its raw excitement, so much so that Leila didn’t quite know if he was talking about the burger or something else that she didn’t want to touch.

Leila let out a low breath and went in for the burger, but then, as if on cue, the music in the studio changed and on came the familiar first thumps to the song Leila was fast growing to hate. “Darling Leila.” Would she ever escape Miles or that damned song?

“Oh yeah!” Matteo yelled, now smiling wide and circling her with his camera as he clicked, clicked around her. Each click of the shutter felt like a tiny prick to her skin.

Leila shot Matteo a death stare but then forced her features to soften as she glanced over to the side of the room and saw the group of execs from Burger Barn huddled in the corner, looking at her expectantly. Bills needed to be paid, and for that to happen, the customer was always right. Leila reminded herself of this tried-and-true mantra as she let out a sigh and softened her features again, going on automatic pilot as she mentally blocked out the song that mocked her and Miles’s now failed relationship and, worse, all her relationships before that. She took a hungry bite of the burger, imagining for a moment that it was the head of the photographer.

Method acting. Zone it out, woman. Use that anger.

Just then her agent and longtime friend, Jasper Weston, stepped into her side view as he went over to glad-hand the Burger Barn folks. Leila took another bite of the burger. This time it was Jasper’s head she was biting off, as she remembered it was he who had told her that taking this job would be a good idea.

“That’s it, Leila,” Matteo finally said. “Though, maybe next time you could go at it with just a little less enthusiasm?” He lowered his camera and turned toward his group of assistants. Leila noted that they were all young and all blond, whether male or female. It would seem Matteo had a type and stuck to it through and through.

“We’re going to need another burger on set,” he said to no one in particular before turning back to Leila. She hoped that the actual food handlers picked up on his query and that it wouldn’t be one of the Stepford blonds who handed her the next burger. “How about we get ready for the next set and wardrobe change, but before that we’ll do the rain sequence?”

Rain sequence? Since when was a rain sequence on the shoot list? Leila thought as she looked around for a rain machine. She saw none. It was then that another on set blond assistant came over and took the burger missing two bites from Leila’s hands and scurried off into the background. Then another young woman came toward her with a large hose and a dubious look in her eyes. Instantly, Leila stiffened.

“No way, honey,” Leila said with a sharp look at the young woman. “You come at me with that hose, you’d better be prepared to eat it.” It was as if the whole garage had got put on mute, as all heads swiveled Leila’s way. She saw Jasper smile uncomfortably at the Burger Barn people and take a step forward.

“Aw, come on now, Leila, darling,” Matteo began. “We need a shot with you wet on top

of the car. You moving around for me. Doing a little dance. Selling those burgers as only you can.” And with that, the damned near geriatric photographer standing in front of her, holding his camera at his side, mimed his version of sexy dance moves, rubbing his hands over his body, bringing them up and, to Leila’s revulsion, licking his fingers.

Leila looked at him in horror and then blinked her way out of the shock of it all and leveled him with a hard glare. “Like I said, little Miss Assistant of the Corn here is not coming near me with some dirty-assed water hose. Now, if you want to try, you can, but I warn you, you won’t like where the hose ends up in the end.”

And with that, Leila slid her oiled body off the car as gracefully as she could and walked off set toward her makeshift dressing room, Jasper following quickly behind.

I hope you enjoyed this sneak peek: Get your copy of THE BETTING VOW today!

Thank you for your support

and I’m wishing you Joyful Reading! 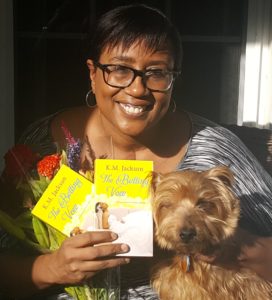 (Me with my lovely author copies and trying to wrangle Jack in for a pic- He’s not happy or impressed.)