Today on ye old blog we have a different kind of interview going on. I’m talking with Caleb Cooper, general pain in the behind from my friend and RWA/NYC chaptermate’s novel THE BILL RIDER AND THE BARE BOYCOTTER. Let’s go Caleb… 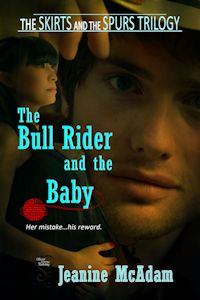 Thanks for hosting me today Kwana, my name is Caleb Cooper. I am from THE BULL RIDER AND THE BARE BOYCOTTER where I consider myself a villain but others would probably call me a pain in the ass.  But in my own quirky and loveable way I redeem myself in THE BULL RIDER AND THE BABY because I’m the hero of that book.  Not a knight in shining armor sort of hero but a decent guy nonetheless.

How did you come to your author’s attention?

My brother Logan Cooper is the hero in THE BULL RIDER AND THE BARE BOYCOTTER.  Many, many times in that book I told my brother he was an asshole, an idiot plus all sorts of other rude stuff.  I think the brutal honesty of my words caught Jeanine’s attention.  I don’t think she completely agrees with how I treated my brother but it does create one hell of a story with interesting characters.

Did you give your author a hard time when she was writing your story?

No, not at all.  I’m not that type of guy.  Unlike my brother Logan, I have lots of potential as a human being.  It just took a little bit of finessing on Jeanine’s part to turn me from a loudmouth idiot into a sensitive man.  But I’m here to tell you, it happened in THE BULL RIDER AND THE BABY.

What do you do for a living?

Next question. Holy hell, did you read the title of the book?

Ok ok! Next question…Who is the love of your life?

If I told you that THE BULL RIDER AND THE BABY would be ruined.  It’s called a spoiler.  Look it up.

If there is a ‘love of your life’, what was the first thing you noticed about her?

She was pregnant.  Hugely pregnant.

Falling off a bull, hitting my head and turning into an imbecilic.  Then again maybe that’s an old fear.  If I were to update my fears, it would be Carrie Wang leaving me.  Jesus H. Christ, I can’t believe I just said that.  I hope Carrie doesn’t read this interview, she’ll think I’m a wimp.

What is the kinkiest thing you’ve ever done?

Now, you’re really pushing it (rolls shoulders).  Have sex with a woman that I didn’t impregnate. By the way, Carrie was seven months along at the time we got together but I was gentle.  That’s all I’m saying about her, don’t ask me anymore.

Will we be seeing you in future books?

You betcha.  There’s THE BULL RIDER WEARS PINK.  It’s about my sister Cassidy. She wants to compete against the men.  You didn’t hear this from me but she’s probably a better rider than Logan and I combined.  Her problem is, she’s a lousy Mom.  Then again, she’s planning to work on that and I guess she gets involved with Pastor John.  Talk about opposites attracting, I don’t know what Jeanine was thinking bringing those two together.

Sexy bull rider Caleb Cooper keeps falling off his bull and hitting his head. Smart neuroscience graduate student Carrie Wang is studying him. There’s just one problem, Carrie’s attracted to her broad-shouldered research subject. But she shouldn’t be, because Carrie is pregnant with Charles Winston’s baby. However, that one-night-stand occurred in a beaker closet and Charles wants nothing to do with her or the child.

Besides being handsome in a long-haired, scruffy sort-of-way, Caleb Cooper is kind and quirky. Carrie can’t stop touching him and their unprofessional attraction is mutual. Problems abound when Carrie’s traditional Chinese mother and Charles come to the rodeo. Carrie’s mother wants her to hook a husband and Charles wants Carrie to give the baby up for adoption. Carrie knows she could never let a stranger raise her child. Can Carrie go against everyone’s wishes and raise the baby on her own? Or could Caleb become a father to this child?

Jeanine McAdam is a writer of twenty-five romantic short stories, a few spicy anthologies and three cowboy books.  Telling stories about imperfect people finding perfect love is her thing.  Even though she lives in New York City she’s fascinated with the American west.  She’s currently writing about bull riders and the spunky urban women who adore them in her Skirts and Spurs Trilogy.  When she’s not writing she spends time with her teenage sons, ultra marathon running husband and two rescue Labrador retrievers named Desdemona (Desi) and Aaron.

Find THE BULL RIDER AND THE BABY:

Thanks once again for being here!