I’m so happy to have my good friend, Laura K. Curtis, the super talented romantic suspense author of Twisted and Lost on ye old blog today guest posting to introduce us to her latest contemporary romance Toying With His Affections. It’s definitely not your mother’s romance. Take it away Laura…

Not Your Mother’s Romance? Well, It’s MY Mother’s!

My mother reads my books. I sometimes wish she wouldn’t, but she’s eighty years old and knows her own mind, and she’s my mother—it’s not like I can tell her not to! She read my first romantic suspense, Twisted, and said she enjoyed it. But one night right after Lost came out, I was on the phone with my father and he said “your mother is reading your book and she wants to know how you know all this sex stuff.” Uh, she what?

Needless to say, we took a few minutes while I cleaned up the water I’d spat all over the couch when he came out with that gem, which gave me a little time to gather my thoughts. “Uh,” I said oh-so-eloquently, “research?”

I mean, seriously. Those two books were romantic suspense. They had relatively little sex as far as the romance world goes. It didn’t bother her that I knew any number of ways to torture and kill people, that I had good ideas about where to hide bodies. Nope. She was only bothered by the sex.

So now I’ve released Toying With His Affections. No murders. No (serious) crimes to solve. Just a woman who sells sex toys for a living. Oh, yeah, I can’t wait to hear what she has to say about this one.

Here’s a little taste of what she’ll be reading…and what you’ll be getting should you choose to get to know Griffin Barstow and Evie Bell, the Sheriff and the sex toy saleswoman. In this little preview, she’s showing him her wares as she prepares to do a home party.

Evie set the papers aside and reached back into the box. This time, she held up a pair of pink, fuzzy handcuffs. “Want to take these on patrol with you, Sheriff?”

“Uh…not particularly.” He grinned, though, imagining the faces of some of his deputies if he showed up with those hooked to his duty belt. The next item wiped the smile off his face. Black and almost evil-looking, it was circle with small rubber spikes all around and one larger protrusion so that it looked a bit like the symbol for Mars. At the end of the prong, however, a perpendicular spike gave the impression that someone had twisted the arrowhead of the symbol to stand straight up.

Again, Evie’s fair cheeks reddened. The contradiction between the woman who could passionately defend the use of creams and toys and the one who blushed attempting to explain the actual use of such products entranced him.

“Uh, that’s for men. I mean, it’s nice for women, too, if the guy wears it, but it’s more designed to increase his pleasure than hers.”

“Please tell me this doesn’t sell.”

She’d regained her composure. And her starch. “Everything sells. But no, that’s not a top ten item.”

She handed him a tube of something else. “This is, though.”

He practically choked as he read the name aloud. “Staze-Long?”

“Yep! Between that and the numerous offers I get in my email every day, I can only assume many men in this country have a premature ejaculation problem.”

She dropped her head and glanced up at him through the screen of her thick lashes. “I didn’t say you could. I need it.”

He dropped the tube and rubbed his hand against his leg. “That’s not what I meant and you know it.”

“Yeah, but you’re so easy to tease. Who’d have believed that under the bad boy of Fairview High lay a closet prude? Your reputation has suffered here today, Barstow.”

She cocked her head. “It may be. I’ll think about it.”

His heart pumped harder and he felt more alive than he had since the day he’d moved home to Fairview. You’ve always been addicted to danger, Bub, and it’s never done you a lick of good. Stay the hell away. But he had a sinking feeling he wouldn’t be able to take his own advice.

If you want another excerpt, there’s one up on my site at http://www.laurakcurtis.com/toying.php Come on by!

You can also find me on Facebook, gabbing madly on Twitter, or musing and giving things away on my blog. 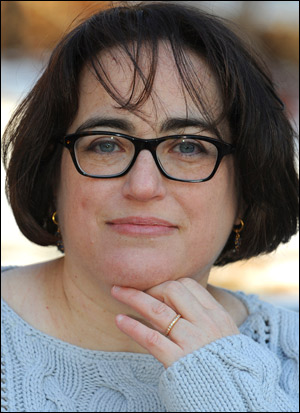 Thanks so much for being here today, Laura. Everybody check out Laura’s books. And you can get Toying With His Affection Here and at all your favorite e-tailers. You won’t be disappointed!