And a big part of my wants to just sweep it under the rug or at least sweep myself under the covers, curl up go back to sleep and pretend this day didn’t even happen. It’s silly I know and totally wrong. I shouldn’t be focused or worried about the fact that I’m no longer the dewy faced young’un I used to be, in fact I should be celebrating the fact that I’m not. That girl was a hot mess and for the most part didn’t know if she was coming or going most of the time.

Now hold onto your laughter, I can hear it from here. You’re all saying but, Kwana, most days you still don’t know whether you’re coming or going. This is true, but it’s less days than it used to be and that’s a great thing. I may not yet be where I want to be and heck, I may not exactly have a picture of where THAT is, but I do know I’m closer to it than I was a year ago.

I have plenty to celebrate in my uncertainty. I have a wonderful family, great friends, a super DH, fantastic kids and still one terrible terrier. Hey, I’m not one to brag (snort) but when I take a moment to stop and think of the good, instead of focusing on the not so fantastic it doesn’t take long to realize how truly blessed I am (note to self: do this focusing on the good more often).

Happy Birthday to me indeed!

Another thing that’s pretty great about hanging now in the middle of the age pack is that I don’t feel the need to beat about the bush about the things I mean to say or the things I want. You’re not going to find me being all passive aggressive (subtweets aside) (though I was never much for that, maybe the shortest of times in my early 20’s during the odd newlywed stage). But now it’s now pretty much in my head then out my mouth and to that I’ll take a page from my mom and just say what I want for my birthday this year leave out any pesky guessing. The gift I’d like the most is for friends to pass the word on about my work this year past. As still a mostly under the radar author I’d love it if you’d tell someone who doesn’t know me about one of my books. That would make my day. More than that, tell 2 friends, and so on and so on… and it would make my year!

Either way just having you stop by as you have been has made the past year more special than I can say. Thank you for being one of my undeserved, but so thankful for blessings this year. Cheers to a fabulous year ahead. 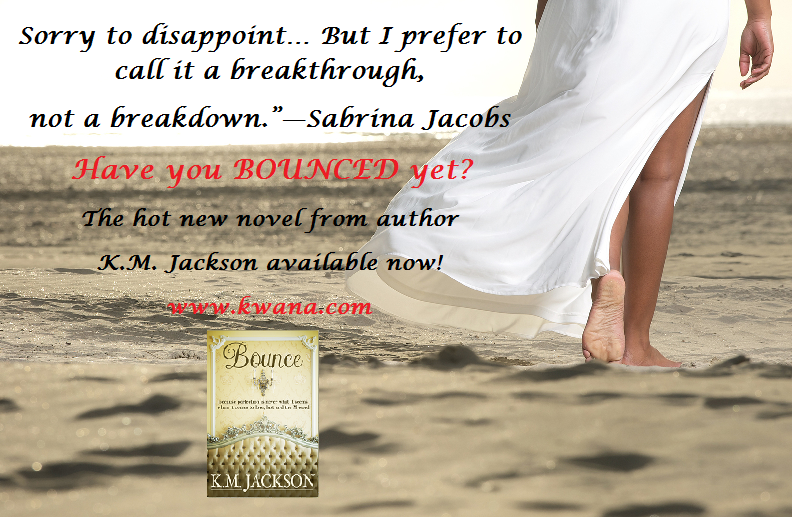 Because perfection is never what it seems… BOUNCE by K.M. Jackson is heating it up! #BounceNovel Pls RT   http://amzn.to/1cOu9FS

All the best… with all my love,