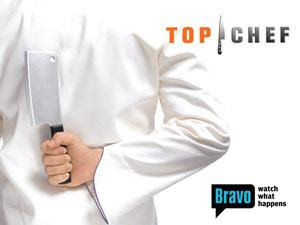 Ok I warned you. Small admission first. I still have to watch my DVR’s Not So Real Housewives. What did Bravo think putting the premiere on at 11:oo? Crazy. I needed a disco power nap to get ready for that thing. Now to Top Chefery…
Chefs arrive in New Orleans and Carla is all blown out and ready to rumble. Stefan is pumped up. Fabio has a Mohawk. And Hosea is… Hosea.
Emeril Lagasse is the guest judge in New Orleans. Surprise. Not. The quick fire is confusing. They bring back Jamie, Jeff and Leah for a chance to get back into the competition. What?! Nobody is happy. The three of them compete against each other in a crawfish challenge for a place back in the competition.

Leah talks about being bitter about being kicked out. I think some will be bitter if she’s kicked back in.
Jamie’s messing with poached an egg which worries me. But I like her haircut.
Jeff is seasoning like crazy. He must have come with the Bam sauce. 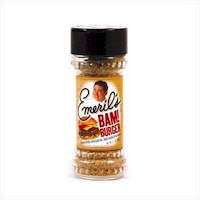 Emeril picks the winner and it’s Jeff. I’m actually happy for him. But his victory is snatched as Padma tells him he has to win the elimination challenge to stay in the game. Oh snap.

The Chefs go to Mardi Gras World (bit of trivia: the DH and I had dinner there when in the Big Easy it was quite fun) and are given instruction and shown a new car like on The Price Is Right. The winner of this challenge gets the car. Nice.
Chefs must do 2 dishes and one must be Creole plus a drink.
Best comment of the night I think came from Hosea who said it would have been the first Top Chef without a Mohawk to Fabio who showed up with it in New Orleans! That was funny.
Stefan goes for a smoke and doesn’t make sausage from scratch? Way to sweat Stefan.
Carla said she’s going to have to MacGyver it. I hear ya.
Carla doesn’t drink and she’s going for it with Non-Alcoholic in New Orleans. Risky but cool.

We find out that Gail is back and Carla cheers. I want to cheer too. Toby the sour puss won’t be missed by the chefs or Tom I suspect.

The masqueraders come into the ball and Carla thinks it beautiful and Fabio is reminded of an old porno movie. He just kills me.
Jeff- Gets good reviews.
Stefan-ok, but rue is not dark enough.
Fabio-a parade in the mouth. Nuff said.
Carla-Hootie Hoo!
Hosea-did good on the gumbo.
I have no clue who is going home.
Judges table too funny. Why was Fabio giving Hosea that funny stare? What?! I laughed so hard. Tom’s face at Stefan’s comment also priceless.
Decision time. Judges say there was a clear winner and it was…Carla!!! Thanks for telling me judges.
Carla won the challenge and a new car!! I’m so happy.

Sorry to Jeff. Buh-buy.
Hosea is in.

It’s down to the dynamic duo. Stefan and Fabio.

And Fabio has to pack his knives and go. I’m not happy about it. Of course it’s all based on attitude since I can’t taste the food but Stefan’s attitude should have sent him home.

I’m for Carla all the way. Hootie Hoo!!