Thank Goodness for Top Chef. I so needed an escape last night.

The fun begins with a Grand Central then quick cut the chefs waking where they live in wherever land New York.
Stefan is in love with Jamie even though he has no chance at all with her. You are so in the wrong ball park Dude. Too funny.

In the kitchen it’s just Padma for the quick fire and no guest judge. The Challenge is playing “Identify the ingredient” and the chefs are put in pairs to go head to head. Stefan is pair

ed with Jamie. How did THAT happen? They are playing “Name that ingredient” ala “Name That Tune”. Cute. Carla says something about; “tasting in her mind” that I can’t wrap my head around, but it cracks me up as I envision it. So Carla. She’s hilarious. I think I get it and I love her. Hosea wins the challenge against Stefan. Good for him.

the elimination challenge the chefs pull knives labeled, old, new, borrowed and blue. Padma is throwing a bridal shower for Gail. Gail doesn’t want veal or black beans besides that it’s all good.

Radhika is with Ariane and Jamie and Jamie tells her go with Indian food again for their borrowed theme. Poor Radhika. I hope she makes it to one day cook Italian.
Fabio, Leah and Melissa are Blue and Fabio is bummed that there is no blue food. So they are going with and ocean theme.
Carla, Eugene and Dan have new so they are doing sushi.
Jeff, Hosea and Stefan are old so they are going old school. But Stefan is trying to play dictator.
I’ve noticed this season in the kitchen there is not nearly as much drama as in past seasons. It’s a real quiet season. I wonder is the producers are happy with that. I doubt it. I’ll come right out and say it. I miss the drama of a true Marcel. At least Eugene is showing a bit of spunk. 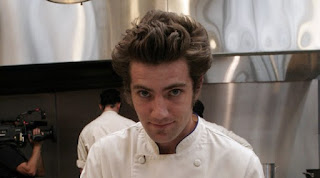 It’s back to the Hosea and Leah flirtation (which I suspect may be manufactured for drama or lack thereof) and it comes out that they both have attachment back home. Hmmm this should be interesting during the recap.

Time for the shower and the longest table ever. Not very good for conversation in you ask me.
First out is ‘something old’. Jeff, Hose and Stefan- Heirloom tomato plate.
Next is ‘new’ Dan, Eugene and Carla’s sushi. I think it confused everyone.
On to ‘borrowed’ with Ariane, Jamie and Radhika and the lamb is not done. It’s down to the wire. But in the end everyone is happy.

Finally ‘blue’ with Fabio and his gang and this late show is running later. Fabio is sent out as the charmer. With all the ohhs and ahhs I think it worked at least in the beginning.
Time for judging. Top groups Old and Borrowed and the winner is Ariane. Again and she is shocked! Jamie is not happy. Always a bridesmaid…

In the bottom are Something new. And Dan is surprised. He says he happy with the dishes and no matter how many faces Tom makes at him or how many sound effects Bravo throws out he thinks they were de-lish! Uh oh, Danny.

Something Blue is on the chopping block too. Fabio wanted to argue, but thinks better of it and shuts his mouth after a steely look from Tom. Those eyes can do it. Smart.
Back in The Not So Glad room things are quite sad. It’s finally doing its job. The judges call them back.
Team blue is safe. Smile Fabio. 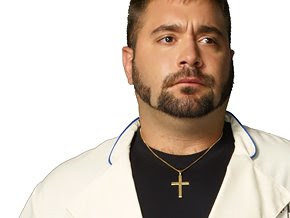