What’s Jack up to? Jack’s wandering around sleepily right now. The debate is over and he’s ready for me to hit the lights. Soon Jack soon.

So the final debate is done. In my opinion it was another win for Barack, but reading th

is blog you’re not surprised by my opinion are you? I’m sure you have your own. Enjoy them. But hey, CNN agrees with me again too. Sweet. I thought McCain’s strategy was throw everything including the kitchen sink and see what sticks and unfortunately for him, nothing did. Another Obama win! What a cool cucumber he is.

But Joe the Plumber? John McCain was so ready with that one, eh? I suspect he’ll be in an ad in about 5 minutes. Plumbers for Palin? Eek. 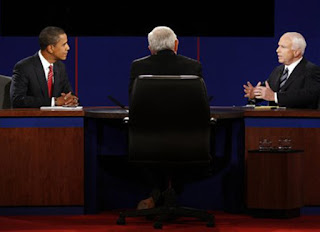 Now Go Vote Why Don’t Ya!! Have fun which ever way you go.