What’s Jack up to? Jack is chilling this morning. Eerily quiet which can only spell trouble or maybe he’s just trying to figure out what’s got me so in a snit with all my blog posts. I’ve been at the computer a lot. Scroll down further to read my other rants. Must go back to MJB, eh, Jack.

America’s Next Top Model gave up double eliminations for our hour this week. It started with a Runway challenge which taught future models to learn to walk at home. First the models met Ms. J at a bowling alley to learn to walk. It was clear from the start that Hannah had the most to overcome. 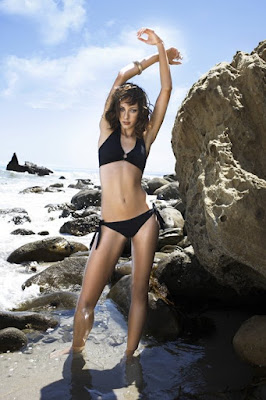 Then there was a runway show where they had to do the show blindfolded. And the worse model that not would be eliminated and not even get to do a photo shoot. It was poor Hannah who could not overcome years of that bad walk in one night. Buh-Bye.

Then the models were woken up early in the morning my Mr. J for which was all about the eyes and getting wet with Nigel. It was an interesting shoot but Isis struggled. She was too concerned with one of her three bottoms coming off and her bits falling out and shocking the crew. Well it showed in the eyes and you know Tyra is all about the eyes so Isis was out. 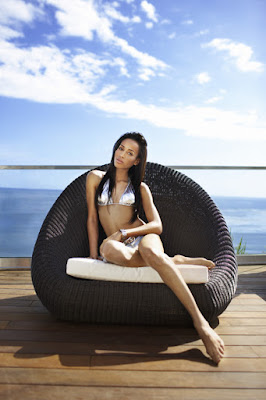 Project Runway starts and Korto says she is not about to go home. I hear ya girl. But Suede knows he has to step up to his game. Well, step it up Suede.
They head to the Runway to do the model trade off. Jerell keeps his model but Kenly dumps her girl, crushing her and take a new model. Jeanne follows suit steals Suede’s model. These girls are mean.
Then they find out the challenge is to design for each other. What? And it must rep a specific music genre
Suede for Jerell- Rock and Roll
Kenley for Leanne- Hip Hop
Korto for Suede- Punk
Jerell for Kenley-Pop
Leanne for Korto-Country

I don’t know why they had to do they model pick. I guess they didn’t want to pay the extra girls to hang around another week.
It’s going to be crazy seeing the designers walk down the runway this week. I’m excited.
Over at mood and Kenley is picking out a bright print. Hmm. No hip-hop there. Tim tries to tell her about it, but like a teenager she doesn’t listen. But she’s trying pants, albeit, very high waisted pants. Hey it’s not a hip-hop 50’s dress.
Jerell had Kenley all vixened up and it’s a little scary to see her that way. And yes there is head gear. But no feathers.
Leanne may be too subtle
Korto needs to go further. It’s too basic.
Suede silenced Tim. It was not amped up enough.

Now to Kenley…Tim had the nerve ask shouldn’t hip-hip be oversized and she went ga-ga. Well, Tim had to school her behind and tell her, “simmer down now” and cut the crap. It’s his workroom and he’s the King. She’s not listening. Oh well. Can we eliminate her right now before the runway show? Leanne doesn’t want to wear that outfit anyway.

So its runway day and the designers are all confidant. Especially Kenley. Why? Doesn’t she think Heidi swathe dailies from yesterday?
They all squeeze into their outfits and go to get made up. It’s so much fun to see them done up. Although I do feel for poor Korto. Really, County and that blouse is not her color. It’s not anybody’s color. Leanne should have known that.
Time for the show and yay, LL is there.

Leanne- ok for the skirt. Don’t like the belt or the scarf around the neck. Agree with LL looks Theme Parky. 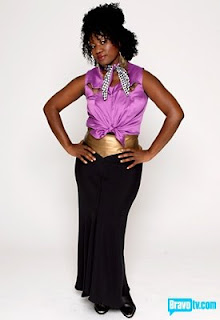 Jerell- ok. More rock than pop to me but cute. 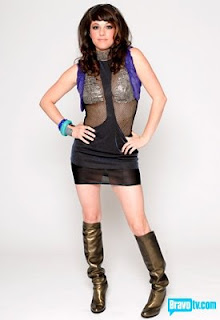 Kenley- ok but not hip hop and shut up with blaming the model for your design. Bad sewing too. 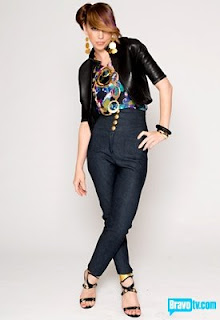 Korto- Yes! She went there. Very good. Suede looked better than normal. Pasty make up agrees with him. 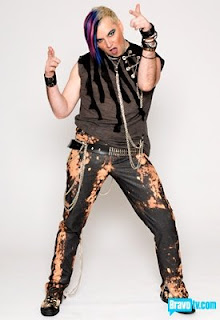 Suede-Yes. I can’t believe I like it. Judges think it was boring. 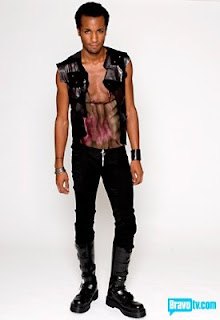 Could this be Kenley’s week? Please. Now crossing toes.
The winner is… Korto. See what happens when you listen to Tim?Yes! Told ya she made Suede look good.

PS- Scroll down to chime in on politics. come on you know you want to.