What’s Jack up to? Here is Jack’s spot de jour now that school is back in session. He just goes right to his spot on the couch and can’t be moved until he wants to move. So what’s Jack up to? Just chillin. 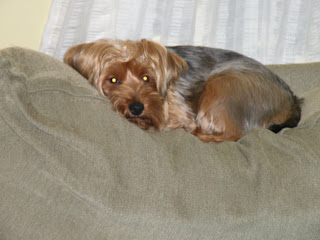 Well now that the RNC Convention/Introducing Sara Palin Show is over maybe we can finally get real and I can get some rest. Did anyone watch and see some of the wild protesters that made it onto the floor? Eek. Now let’s actually get down to what’s really important and past the silly sound bytes and onto some real questions and issues. That is if some don’t run scared and will actually sit and get interviewed by the press.

But no fear thanks to Mel-O-Drama and the fact that she’s more of a Maverick than anyone I know my hat has been officially throw into the ring for President. Sorry I had to go there. Click here to check it out. Have fun!

And thanks to Decorno for this link to an article by Gloria Steinem from the Los Angeles Times on Vice Presidential pick Palin. It’s an amazing article.

Here’s a quote: “Here’s the good news: Women have become so politically powerful that even the anti-feminist right wing — the folks with a headlock on the Republican Party — are trying to appease the gender gap with a first-ever female vice president. We owe this to women — and to many men too — who have picketed, gone on hunger strikes or confronted violence at the polls so women can vote. We owe it to Shirley Chisholm, who first took the “white-male-only” sign off the White House, and to Hillary Rodham Clinton, who hung in there through ridicule and misogyny to win 18 million votes.

But here is even better news: It won’t work. This isn’t the first time a boss has picked an unqualified woman just because she agrees with him and opposes everything most other women want and need. Feminism has never been about getting a job for one woman. It’s about making life more fair for women everywhere. It’s not about a piece of the existing pie; there are too many of us for that. It’s about baking a new pie.”