What’s Jack up to? As I’m writing this at 11:30 he’s snuggled in his bed after a day of being ‘Just Jack’. You know. Getting into all shorts of scraps and general mischief. It’s tiring.

OK, I’m going to try and get though my notes and do the recap as I intended and not let my bias of the ending get to me, here goes. If you didn’t watch don’t read any further. Click off and go catch a repeat show tonight if you don’t want to know the outcome. You’ve been warned.

Now…
The show opens with the chefs being awakened by Tom Colicchio at 5:45 am for the quickfire where they have to go to a famous Chicago restaurant, Lou Mitchel’s and work the egg station. Sounds hardcore. The top station workers are Dale and Antonia and Antonia is deemed the winner. This is her fourth win. Bummer for my Dale.

Then Tom tells the chefs he’s going out of town and won’t be there for the elimination challenge. What? No Tom? Say it ain’t so.

They meet Padma at a not so secret location for the challenge and she tells them that Restaurant Wars is back on! The Chefs are way too happy. I don’t get it. I can’t stand all this team stuff which is why I fly solo. Hmm, that may have come out wrong.

Since Antonia won she gets to choose her team. She quickly snatches up Stephanie and Richard which leaves Dale, Lisa and Spike on the other team.
It’s suddenly Wedding Wars part Deux! I smell trouble cooking.

The teams are off to Whole foods and I notice how bad everyone’s hair is. Why is Richard now wearing a this bra-band in his hair? Strange.

Antonia’s team, Warehouse, is all butterflies and light and I think there are doves flying around them putting ingredients into their baskets. While on Dale’s team the gods are turning on them from the start with Spike stirring the cauldron and I swear there are trolls stealing the rice they want right out of the store!

Then onto Pier 1 and Stephanie is doing decor for the Warehouse restaurant and Spike is shopping for Mai Buddha. I guess he’s the one for his great way with accessories?

The horror continues in the kitchen when in place of Tom, Anthony Bourdain comes in and gets Dale’s Team, Mai Buddha sweating even more sine he knows Asian food better than anyone. Uh-oh.

Back to work. And reinforcements are brought in. It’s Mark, Andrew, Jen and Nikki and the teams can each pick one. Antonia Picks Nikki to make some pasta and Dale picks Jen.

Poor Mark and Andrew. I don’t think Andrew even speaks. He just glares at Lisa. I understand, sweetie. Those wounds run deep.

The fights continue with Dale and Lisa. He tells her some of her food is no good. She can’t fix it. Spike mentions how he can’t be blamed. He should be kicked out for that comment alone.

It’s still beauty and light on the Warehouse side. I think I see elves working over there now along with singing mice. Just great.

Times up. Its service time. Stephanie has changed into her swanky black dress and Nancy Sinatra boots and Spikes taken off his fedora for the occasion. The kitchens are hot and Dale is hotter. It’s a mess.

Down to the food. No need to go crazy. Warehouse is better. No fighting. Elves and fairies cooking the food and it shows.

They win and Stephanie is the ultimate winner. Good for her. She’s the tops.

Now the losers are called out of the Not So Glad Room and Spike is the ultimate in jerkyness. I just can’t stand him. he should be on a daytime soap for being such a villain.

Lisa is just a nightmare. There is not a thing about her I like. She can’t cook. Has he won a challenge at all? She never steps up to the plate, but of course, not of it is her fault. Nev-ah!

Now to Dale. His food wasn’t good. The judges said so, but he also had no help. I just wish he could have cooked on his own.

They have got to be kidding me with this! I can’t believe it. How can both Spike and Lisa still be here and Dale gone. I can’t take it. He’s won more quickfire’s and challenges than either of them and he’s out. It’s not right. This day went from bad to just way bad-er!

I’m so over Top Chef… at least for now. Love ya Dale. 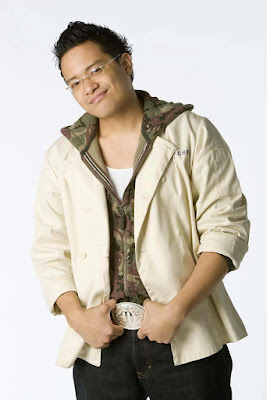 On another note congrats to David Cook for winning Idol and making a fool of Simon. I do love that!

Come on back tomorrow for Ask the Agent. Tell a friend!