What’s Jack up to? As I’m writing this he’s down in the basement giving me a break and being company to the DH who’s been working was too hard lately. I’ve been seeing way too much of his back. 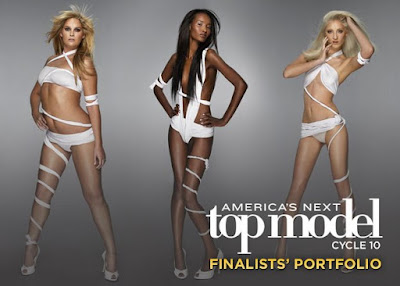 It’s Finale night for ANTM and it’s down to Fatima, Anya and Whitney. Tonight the girls shoot their Covergirl print ad and commercial and Anya is all verklempt about it. Ahh, so sweet.
Fatima was first and she was beautiful, but a little robotic. Whitney was clearly nervous, no beauty queen fakeness tonight. Anya was cute and giggly and uses her nerves well. Fatima was going on about how she’s so much more relate-able to others than the other girls. Huh? Well, OK, um, if you say so.
Already they are judging. Man this is a quick episode.
Whitney’s commercial was just, Eh. Her photo was also just ok for me, I was not all that crazy for it. What’s with the black and white?
Fatima’s commercial was no winner either and her photo was pretty and I actually like it better than Whitney’s but the photo is better to me and the judges hate it. Go figure.
Anya’s commercial was a mess with her voice but the cutest to me. Her photo was nice but didn’t showcase her. Paulina thought she looked stupid. Ouch. Who took these photos? Not your cute Covergirl shots if you ask me. Did ya? No. Sorry.
What did you say Tyra? A Donatella Vercace show!!! Hold the phone!!!
Commercial break and it was Selisha’s final my life as a covergirl. Buh-Bye- I have to say her’s were forget-able. Give me cha-cha Jaslene over her any day.
Decision time and the final 2 are… Anya and…Whitney!! Wow! Would it be that a plus size model could be the winner of America’s next top model? Is Top Model tired of playing with this?
The Runway show is lots of fun and I love the male models in the very tiny Speedos. Anya is beautiful and Whitney has plenty of attitude. What a short show with only 2 looks for the girls to work out. Oh well. Once again I feel so used. It seems to be the season and just that quick they rush them into the judging room not even changing poor Whitney’s dress.
Things look good for Whitney’s walk since Tyra says she reminds her of herself.
Always a good sign.
Then its comparing photos and they go back and forth. “She’s pretty-no she’s prettier.” It looks like Anya wins here.
So who’s the real winner? It’s…WHITNEY!!!! Holy Smokes. It’s finally happened. Paulina said it this should not be called Plus sized this should just be called BEAUTIFUL. 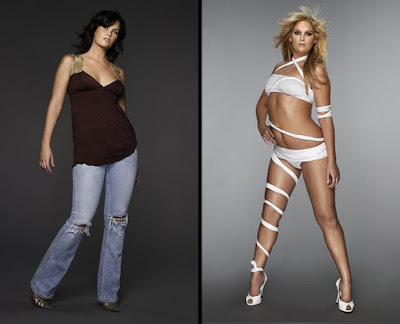 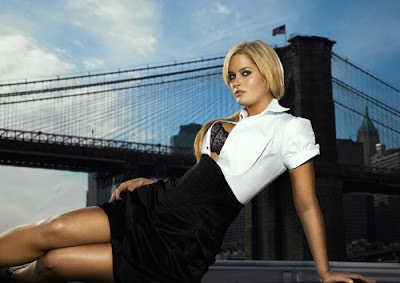 Sidebar: Syesha is out on America Idol. I don’t think she ever got a fair shake. I’m not happy with it but I didn’t really watch this season. Let’s hope she does half as good a Jennifer Hudson. 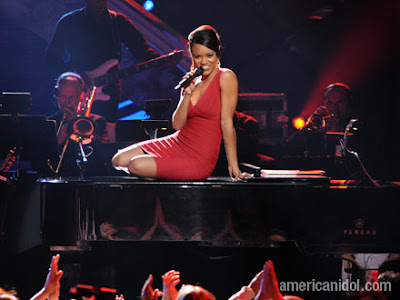 Now onto Top Chef to top it all off.
The show opens with the chefs are still tired and Spike is still mad at Dale and Dale like ‘whatever’ and Andrew is still Nuts.
And guess who’s here? Cutie Sam Talbot!!! And another excuse to pull out the photo of me and Sam. Sorry, deal with it! 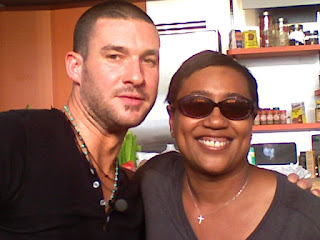 The chefs have to make a sexy salad in honor of sexy Sam and they have 45 minutes. It had better be fabulous. 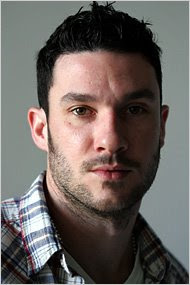 I love that Antonia loves a fatty salad!
Having the extra time was too much for Stephanie and she didn’t finish plating her dish. Uh-oh.
Lisa’s dish was no good. Stephanie’s was bad and Richard’s was a no-no.
Sam liked Spike, Antonia and the fat and Dale. Spike is the winner. Boo!! Hiss!!
The elimination challenge is gourmet boxed lunches for the Chicago PD that are healthy too in honor of Sam who is diabetic. Aww.
As the winner Spike gets to pick his protein, vegetable, fruit and whole grain first and then the other chefs can’t use what he picks so he picked chicken, tomatoes and bread to mess up the other chefs royally.
Andrew is extra crazy this episode and making Stephanie smell his ‘success’ in Whole Foods. Back off! Every girl does not want to smell your ‘success’. Nasty!
Here’s the rundown:
Antonia is making curry beef and jasmine rice.
Andrew a Sushi bowl? For police officers?
Dale is doing cabbage cups with bison and Antonia is convinced he is a one trick pony.
Lisa is doing brown rice with Shrimp and stuff. Tom thinks it’s too spicy.
Stephanie is making a mushroom leek soup.
Spike is doing evil chicken salad.
Fauxhawk Richard is doing lentil burritos.
Suddenly Lisa realizes somebody raises the burner on her rice and she is MAD! She’s crying sabotage. Time is running out and its chaos all of a sudden. Lions, Tigers and Bison, Oh my!
Now the chefs are the Chicago police department and being a cagey about passing their food out.
Stephanie’s soup goes over well.
Spike’s salad is pedestrian.
Dale’s bison is nice and flavorful
Antonia’s beef is well cooked and delicious
Andrew’s sushi is a manic as he is.
Richard’s burrito is tasty and not an annoying as his catchphrase of “tell me do you like burrito?” Sounds like a bad pickup like to me. Always answer no.
Lisa’s stir-fry is spicy and the rice is undercooked.
Back in the Not So Glad Room Padma calls Dale and Stephanie. I’m happy. They are the top 2. I just love Dale’s green headband. Makes me want to run and get some shell top Adidas. The winner this week is …Dale!!! Yay! In your face Lisa and Spike. He gets wine and to visit Napa. I wonder will Dale be there when I am in July? Hmmm…. Dinner with Dale. How intense would that be?
The losers are are Lisa, Spike and Andrew. Let’s get ready to Rumble.
Andrew is fighting for his sushi and drops the F bomb.
Spike looks hot and sweaty in this week’s hat. The judges call him on his ingredient pick which is great. They saw right through him. Then he got all tippy with Tom. You just don’t do that. Double smack.
Lisa is all, “whatever dude.” Then crying sabotage again. Pla-ease. Nobody believes that mess. The shrimp were bad too. Then she adds out of the blue that Andrew didn’t use a whole grain. Threw him WAY under the bus. WAY UNDER!!!
The Not So Glad Room in mad as hell. Andrew is making even Antonia scared. She needs to move her butt over and away from Lisa. I wouldn’t sit next to her with Andrew making the crazy eyes.
They are all called back and the chef going home is… Andrew. UGH! He’s cute and says that no security is necessary as he leaves. Classy. So Andrew. I’ll miss him. I’m so mad it wasn’t Lisa. SO MAD! UGH! 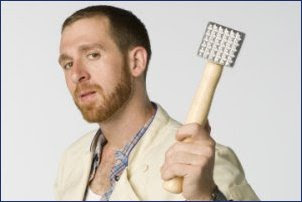