So it’s Wednesday night and America’s Next Top Model time.

The girls are hatin’ on Dominique and Dominique is being delusional calling herself the Seleisha of this competition. What?! One thing’s for sure, Anya’s been rocking. And now it’s down to Anya, Dominique, Whitney and Fatima.

The first challenge has the girls photographing each other which was interesting then they got to photo graph Paulina, a judge. Better had not make her look bad! Fatima did a good job and was string. Dominique faltered and had Paulina running. Whitney was professional and in awe. Anya and all with her “vision” and tossing petals. It may work or not.

The winner was Fatima. She was thrilled to finally win a challenge. I think this was a good one for the girls. I have a feeling they are setting Fatima up to get to the finals.
Now to the photo shoot and it’s night glamour with Nigel and he’s not happy with anyone. Anya didn’t get it. Fatima was a mess. Whitney was posing and Dominique was staging. It was all a ‘hot tranny mess’.
We’ll see what happens in panel.
Anya gets a good review. Whitney gets a so-so. Too posy.
Dominique gets a real ‘hot tranny mess’ review and they tell her she looks like transvestite. Poor thing. Fatima has a sweet shot but it’s just sweet.

The girl going home this week is… Dominique. Guess what? I wrote line this even before Tyra called her name. 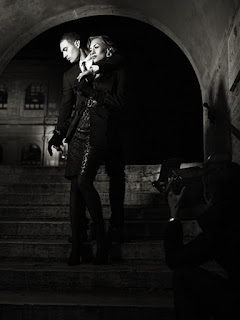 Next Up is Top Hot Mess! and the Wedding wars.

Top Chef starts with Spike and Andrew crying over Mark. Waaa!
Quick-fire and no special guest. Just Tom and Padma and the winner of the quick-fire no longer gets immunity. Eek. It’s a fork spoon team thing and their racing to make mayo, cleaning monkfish fish, slicing oranges and doing something I don’t understand with Artichokes.
Dale, Lisa, Nikki and Spike are one team and Richard, Andrew, Stephanie and Antonia are on the other. Dale cheers Antonia like he’s in the hood. Yelling “Strong Island” It doesn’t work. He punches the locker.
Antonia says he needs his diaper changed. Perfect.

Now for the challenge. Wedding wars. They are catering a wedding and the chefs are not happy. 125 guests each. The bride and groom run their own restaurant. Uh-oh. One team gets the bride and other gets the groom.
Groom’s team is Dale, Nikki, Spike and Lisa they get Italian and Nikki gets happy. Dale is not feeling her. Lisa is ready to fall in line with Nikki. I’m with dale. Why trust Nikki?

Bride team, Richard, Andrew, Antonia, Stephanie get. Southern and Fried comfort food. Stephanie is already giving Andrew the smack-downs.
The chefs even have to decorate and Richard admits to wearing pink shoes. Why? I don’t even wear pink shoes. That’s just wrong.
Grooms side doing a bunch of stiff but what really worries me is that Nikki is making pasta again. Uh-oh.
Bride’s side: they are also making a bunch of stuff that sounds just yummy. No time to get into it thouygh. Sorry.
I’m loving Dale tonight. He’s on his meats (shut up) and just moving. Fast and furious but it’s getting on the other chef’s nerves. They don’t like his quality.
Uh oh . It’s getting late and Richard’s getting on Andrew’s nerves.
Nikki is mulling over the pasta and checking on Dale. She better worry about that pasta.
Dale is chugging the Red Bull. Antonia had the crazy eyes.

Tom walks in looking like sunshine in the morning and the chefs look that hell. They can’t even remember what they are doing.

The wedding is on. Tom thinks the groom’s cake is fugly. It is. But tastes good. The chefs are a mess and Dale is still cooking is behind off and the other chefs are hating him for it. Nikki throws his under the bus while she’s serving the judges. I can’t stand her!
In the judging room: Brides team wins and I knew and Richard is sweet gives is win to Stephanie for her cake. Aww. She shares. Aww. Move on to the smack down!

Now for the losers.
Spike tilts his fedora and spits fire at Dale. FIRE! Name calling and all. Nikki steps back and takes no responsibility for the all Italian menu. NONE. Hate her! Dale takes ALL responsibility.
Glad room is anything but. The Glad people do not want their products shown!

Judges deliberate and…Nikki is out!!! Yes!! 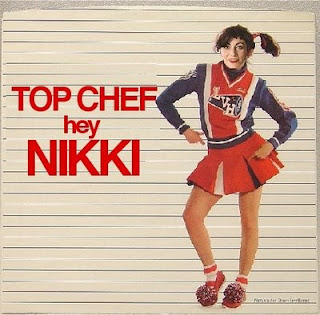 photo from Blogging Top Chef. Too funny check them out.