What’s Jack up to? Right now he’s chillin’ perched high on the couch where he can watch the coming and goings of the block. There’s no getting anything past Jack.

ANTM is over and so is Survivor but thank goodness I still have Top Chef.

The show opens with the women excited about 3 women in the final four. I’ll be excited if Lisa is not one of them. Is that mean? Well, I’m still bitter so I don’t care.

The Quickfire challenge is top butchery. Spike was the man with the dry aged long bone in rib eye or at least that’s what he thinks.
Padma and a guy named Rick Tramonto are waiting at the Top Chef kitchen and they have to prepare their steak for Rick. He likes his meat medium rare. OK. I’d never know what to do with than bit of info.

Richard made me laugh when he said he liked playing with a lots of meat things. Suddenly I was 12 years old. Tee hee.

Loved Antonia with all her butter. She was a second Paula Deen. My kind of girl.
Bottoms were: Stephanie, Richard
Tops were: Lisa (UGH!) Spike and Antonia
Winner was: Spike. He knows his way around a meat market. Why am I not surprised?
Elimination challenge is they are taking over Ricks Steak house for the night. Uh-oh. Feel’s very Hell’s Kitchen to me. It could be a problem.
All the chefs have 3hours to make an appetizer and a main dish.
Spike got first dibs as the quickfire winner.

The chefs are making:
Spike- scallops and Tomahawk chops. Everyone is giving him crap about his frozen scallops. Even Tom. Ha! Every time he tries to screw over the other it always backfires. He’ll never learn.
Antonia- warm mushroom with artichokes and rib eye
Stephanie –veal sweetbreads appetizer and beef tenderloin. Folks are going nuts over her. I smell victory.
Richard-Crispy sweetbreads appetizer was good. Prime Beef tenderloin. I love how he’s thinking of his wife home working hard. That’s sweet.
Antonia-mushroom and artichoke salad.
Lisa- Grilled shrimp and NY strip with spicy apple and peanut butter. Tom pulled a face on her with that one. Not 3 minutes into things was Lisa already talking sabotage. Is she serious with that crap?

Tom is the expediter in the kitchen, meaning he’s the head guy in charge overseeing everything. So they had better not mess up in the kitchen.
Judges love Stephanie’s entrée. Surprise. Surprise.

Sidebar: The survey this week was which chef was sent home too early. Andrew, Jen or Dale. Of course Dale won. I know this poll went up because the Bravo message boards probably went wild when Dale was booted last week. Hence the poll this week. They know a screw up when they see it. I see a whole new show here. The battle of the prematurely eliminated. Two easy picks off the top of my head: Dale and Tre. Who would you add? 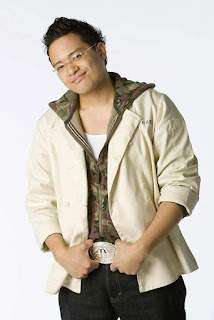 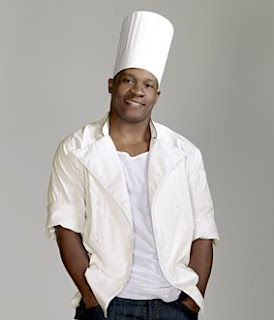 The VIP’s arrive and it’s Hung, Howard and Ilan, all past winners. Hung look hyped on, well, I don’t want to know what. Let’s just say life, shall we?

Tom ran a smooth kitchen. No, not Hell’s Kitchen there.

Back in the NSG room and the chefs are ready to hit the sauce, but Padma calls them all in before the drinking game can begin.

First up is Richard. They like the appetizer want more sweetbreads. Entrée was nice.
Stephanie They like all around. She is the shizzle! She did sweetbreads too. Note to self: try sweetbreads.
Lisa was a problem with the app and the entrée
Antonia The like-ee
Spike they like his meat, but not his scallops. The judges tell him he should have never picked the frozen scallops. The Spike the big dummy tells Rick; well he should have never had them in his restaurant’s cooler. Oh, no he didn’t! Crazy!! I can already hear it. “Spike, pack your fedora and go.”
In the NSG room he realizes he was an idiot for it. Um, yeah.
Back to the judges it’s down to Lisa and Spike to go home who will it be?
First the winner. No surprise there its Stephanie. Woo hoo!
Richard and Antonia also go to Puerto Rico.

Now back to Lisa and Spike. I so wish it was down to these two last week. But the loser this week is…Spike. UGH! 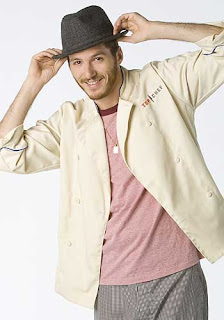 I’m even sad to see Fedora Spike go over Lisa and you know how I feel about him. When will it be ding-dong the witch is dead? Next week off to Puerto Rico and if my eyes don’t deceive me, I think she washes and cuts her hair. Hmm worth tuning in.