What’s Jack Up to? He’s off to bed. Enough running for one day.
It was a fun and light America’s Next Top Model without the downer Lauren there, although Fatima tried to take up the slack with her, “I’m so great attitude.” I spent most of the show thinking, she is outta here! Sigh.
I was happy that Whitney won the challenge after the judges were so down on her “fakeness” last week. But I saw a vulnerability in her this week that I liked. Oh and it was Tyra as a photographer week. Yay! More Tyra and Jay screen time.
On a truly annoying note: What’s with the previews for Farmer Wants A Wife? Did we not learn anything from Joe Millionaire? Yech!
Ok back to Top Model and the judging and Trya totally overacting with bad accents. Now wonder she gets Whitney’s over the top-ness. But I think she may be out today. The plus size girl has gone as far as she’s going to go in the competition. Will a plus size girl ever when this thing? I don’t think so. It will go off the air first. It’s never a fair fight.
Votes are in:
Fatima is 1st -ugh.
Dominique is 2nd- good for her because the judges were just so mean ragging on her sad outfit.
Anya is 3rd
It’s down to Katarzyna and Whitney- Uh -oh- the girls who stays is….. Shocker!!! Whitney!!
I am so eating my words. I think Whitney has no gone further than any plus size girl on Top Model. Go Whitney!
Buh-Bye Kat! What a beautiful girl. She’ll be just fine. 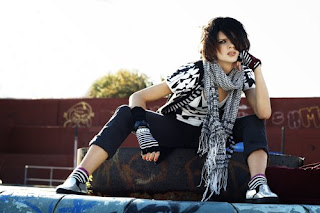 Now onto Top Chef!!! Chef-nasty!
The chefs wake up mad as hell and ready to take the prize. Bring it on!
The guest judge is Lady’s Oprah’s personals Chef, Art Smith. You all know I love all things Oprah. So I love art Smith! And the quickfire is all about timing and making a perfect entree in 15 minutes and it’s an uncle Ben’s commercial. Go Bravo and place those products!
I love that Art went around and told the chefs what he was thinking and wasn’t like the rest of the sourpuss guest chefs that come on. All except mark and Andrew Hmmm….
And the winner was Antonia with her rice salad. Go figure.
Now the elimination challenge is a charity thing for arts organization Common Thread (how very Oprah) of him. They have to do dinner for 4 with only 10.00. 10.00!! Not in the recession baby. Write to the president. Yech.
Why are the boys always running into the Whole Foods? Running? I don’t get it. With 10.00 you’re not going to buy out the chicken counter.
Dale is doing turkey bratwurst and cabbage.
Stephanie-chicken and couscous and peanut butter and tomatoes.-judges don’t like.
Andrew-chicken pillard
Antonia-stir fry pasta which she makes for her daughter and she shared a sweet phone call with her daughter to get the awww factor going. It worked.
Mark-Vegetable curry
Lisa-Chicken Edamame and black beans
Spike-pasta puttanesca
Richard-Roast Chicken with beets and apples
Nikki-Another Roasted Chicken and veggies. I’m now clucking.
Then it’s back to the kitchen and surprise a bunch of kids from Art’s program come into be assistant chefs. Happily it was not like the Project Runway challenge and there wasn’t and big time diva’s but Spike did get his kid bleeding right out of the gate.
Tom’s going around now and how sweet is he with the kids. Awww. Love my Tom. He’s so unpredictable. Now to look at him you’d think he’ kick a small kid now be so sweet.
Judging is on and Mark is complaining about Tom being in the kitchen. What a Diva!
The judges like: Nikki and Antonia. Wow?!
The judges don’t likie:Lisa, Stephanie and Mark- Uh Stephanie. say it ain’t so. Stephanie in the bottom again? I just can’t call this show.
And ugh! Someone wipe the visual from my mind. Richard want to go home and make some baby blazes. Did I need to hear that? Is he going to bed with that fauxhawk? Not a turn on.

Now to the No So Glad Room. They want Andrew, Nikki, and Antonia. Silence. Time to switch it up.
The winner turns out to be Antonia who did it for her daughter. Clear transfer of energy.
And for the bottoms three. Lisa, Stephanie and Mark.
Stephanie said her couscous was bad. mark said that Tom doesn’t like him. What? Tom’s not thinking about you babe! Lisa is mad and says she enjoyed her dish. She doesn’t know why she’s there.
I think she should be kicked out for the eyebrow piercing. It’s worse than the fauxhawk to me. Sorry if I’m offending any piercers here, my cousins included, but they already know how I feel since I’ve told then to their face.
The judges are deliberating and it’s rough. The Glad room is Sad and Stephanie is nervous. me too.
But it Mark that has to pack his knives and go. Tom let him know that he doesn’t dislike him and they can share a beer. Yeah, like THAT will be happening. Right. 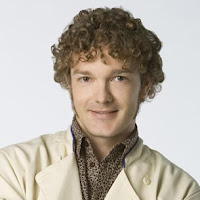