What’s Jack up to? He’s exhausted after 4 hours at the groomer today with the other “kids”. The dear went straight to the hall closet after and would not come out. He was so over me. But at least he’s clean and you can see his eyes. Picture to come soon.

America’s Next Top Model was a recap show. I just don’t have time for those. It’s like a long commercial break.

But happily Top Chef was all new. 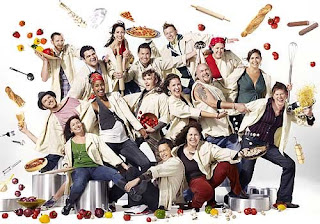 The show starts out with Jen being so cute and defending her girl who didn’t cut it last week. The we are introduced to Ming Tsai for the quickfire and the blind taste challenge. Antonia is excited. The chefs have to choose the more expensive dish. Stephanie was the worst which is surprising and Antonia rocked and won so she has immunity.

Now onto the elimination challenge. It meals on wheels! Wheee! And its another team challenge based on the 4 elements of earth, water, fire and air and doing a starter.

Water team: Richard, Andrew and Mark are poaching fish and way too happy about it. WAY to happy with the high fives and of course Richard is in charge and assuming the role as executive chef on the 1 dish starter. Gag me!

Air is Jen, Nikki and Ryan. They are doing duck and pomegranate. Ryan messes up and uses all the pomegranate. Someone get him off the island.

Earth is Spike (with a herringbone fedora) , Antonia and Zoi who are arguing over soup from the start. Chill babies. Get it together.

Fire is the power team with Dale, Stephanie and Lisa. The tension is hot. Lisa is not happy with Dale or his devilish eggs. I love all of Dale’s snide impersonations of Lisa. Oh Dale you are so dry! Onto Whole Foods and Lisa is mad and now fighting for Asian. Way to fight girl! She wins out. Good for her.

Sidebar: I just noticed that Spike is wearing a crazy hat in the confessional that really does look like a Ricky original and I’m nervous for him.

Team Fire and some good looking grilled shrimp and the judges are happy, happy, happy!
Team air’s Duck is next and uh-oh I head some complaints.
Team Earth and the beef and more complaints from the judges, the diners and Spike! Yech.

Time for the judges table and the Glad not-so-glad room. Richard is whining. Why you not so bad now, Dude?

And the Fire team is called in and congratulated. They are so happy. I’m glad Lisa won this big prize since she really fought for this. Dale is bitter but man enough to admit it.

Now Earth and Water are called in for the bad news. Richard is in TROUBLE! Mark and Andrew are just there. The Earth team is called on the carpet for their dish being bland. Zoi is fighting for her herbs and Spike is still bringing up his missed soup.

Back to the Not So Glad Room and the big fight. Jen is bigging up Zoi telling her she’s an amazing chef. Is love blind? Richard is whining and Spike is mad at himself.

Back to the judges and it’s the end for Zoi. I saw it coming.
The Not So Glad Room is a mess. Jen is in tears. There is hell to pay and even with the show over the arguing continues. What tha-! Spike jumps on Antonia and Jen loses it, then Dale says something, Lisa jumps in and Dale tells her off because he’s pissed about not going to Italy. Spike goes too far with Jen and she kick a chair. Yikes! It’s Top Chef guys. Chill out and cook something.

Buh-bye Zoi. Thanks for the memories. 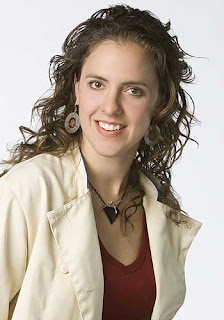