What’s Jack up to? Today he’s in a silly, playful mood and for some reason thinks we all want to chase him around the house in order to get him to go outside. Dude, chill no one really wants to take you out that much.
First off, sorry for the crazy long post. It’s Reality TV and a lot to talk about. I promise to write shorter tomorrow.
Fox’s new show The Moment Of Truth premiered last night. OMG. What a trip! I wanted to turn away as soon as I put it on, but I couldn’t and I’m sure that’s what Fox was banking on. The whole train wreck effect. I watched one married man and personal trainer, strapped to a lie detector, taken down by lying on the question : Have you ever touch a female client more than was necessary? He said, no and that was a lie. Did I mention that this was asked right in front of his wife? Yikes. The real moment of truth for me is: Will I watch this again? Sadly, I have to say, yes. It won’t be programmed into my DVR, but if I pass it I can’t promise not to watch. Ugh! Fox you’ve done it again.
Now onto something I can be proud to admit I watched. Let’s talk Project Runway and the Levi’s Jean challenge. I have to say I got excited with talk of the Jean Challenge. It took me back to my denim roots and how in the late 80’s when for my entrance project into FIT, I decided to hand sew (poor little, Kwana had no sewing machine) the heaviest weight denim into a full 6 gored skirt with a matching denim bustier. Total Jody Watley! Don’t You Want Me. The finger pain was worth it when i got my acceptance into FIT.
Now, please tell me why did they make the designers run for the denim ala Supermarket Sweeps. Why?
I just loved Chris talking to his garment talk. Crazy, but real. Too bad the dress didn’t talk back. I thought he was on the way out this week with that one.

Poor Sweet P and her Hippy dress. It had Tim saying what to me was the line of the night. “Resolve the skirt!” It shows you should always listen to Tim Gunn. Thankfully she did.

Rami, wow, you can even drape denim. Bravo.

Christian’s jacket was nuts to me, but his jean was Fierce.

Bravo has totally caught on to the fact that Christian the star of the show and featured his fabulous whinyness to the fullest. Now Christain tell us what do you really think of Ricky?

Oh, Ricky you cry baby. Wipe those tears away. You won.

Jillian and Victorya doing the coat smack down was fun to watch develop. But I was shocked to see Victorya go. I thought she won this round, just barely. 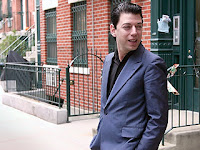 a fabulous note and thanks to the guys at Project Rungay for the heads up, Bravo has decided to make my day and do The Malan Show! It’s a short web show. Click here to check it out. I promise you won’t be disappointed, darlings.