Today on ye old blog I’m so happy to have my RWA chaptermate, friend and debut author, Julia Tagan here to talk about her writing and her historical A Question Of Class out from Kensington/Lyrical. Thanks so much for being here today on ye old blog, Julia! 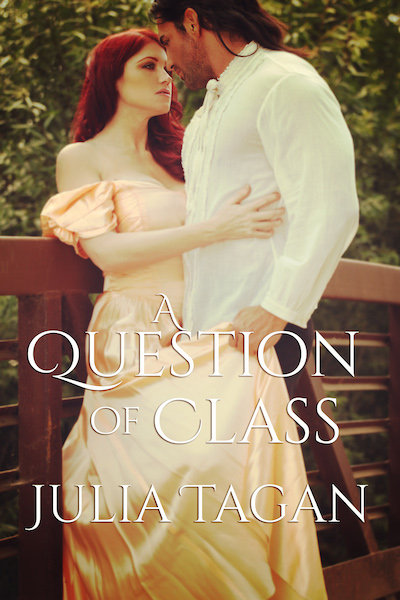 First off can you tell us a bit about your current work A Question of Class?

Sure thing – thanks for having me! “A Question of Class” is set in New York City in 1810 and involves a woman who’s risen into high society, only to find out she’s being tossed aside:

On the strength of her wit and intelligence, Catherine Delcour climbed from Connecticut poverty to opulent Paris society. But once in New York, her lowly past is a scandal her wine merchant husband won’t tolerate. After five years of marriage, Morris announces their union isn’t valid and reveals his plan to send her to the West Indies. Fearing she’ll end up destitute, Catherine schemes to escape–and secure her future with his treasured bottle of wine.

Under the guise of supervising Delcour’s wayward wife, Benjamin Thomas seeks to avenge his sister’s death by ruining him. But Catherine isn’t the spoiled society wife Benjamin expects. His growing affection for Catherine threatens more than his carefully constructed plans. His vow to never touch another man’s wife has never been harder to keep than when he’s around the beguiling beauty.

When Catherine and Benjamin join forces, their sensual natures collide even as their individual desires for passion, vengeance, and escape threaten to tear them apart.

What inspired you to write this story?

I was inspired by a visit to the Morris-Jumel Mansion, which is located in upper Manhattan. A scandalous woman named Eliza Jumel lived there in the 1800s, and after reading her biography, I realized her story would make a great jumping-off point for a romance. Her ghost apparently haunts the mansion to this day.

What made you choose this genre to write in? Do you enjoy the research part of being a historical author?

I love the idea of stepping back in time, and I have to say the research part of writing is both enthralling and distracting. You can research for months and months and still feel you don’t know everything you should. At some point, you just have to start writing. For example, in an early draft I had a coyote howling in the distance, until one of the judges in a contest I’d entered pointed out that there weren’t coyotes in New York in the early 1800s. Who knew? Luckily, there were wolves, so it was an easy fix.

Can you tell us a bit about your writing schedule. Are you a Plotter or a Pantser?

I am such a plotter, no question about it. I’m amazed and awed at authors who dive into a story without knowing their way out. My process involves first figuring out who the main characters are, doing tons of research into the period, and then setting up an elaborate diagram on the wall of my study, using different colored sticky-notes, to figure out what happens when. From there I write the synopsis and then I’m good to go. It helps because even if I’m stuck on one scene, I’m excited about what’s coming up and that gets me through any rough patches.

Lastly what can readers expect next from you?

My next historical romance, “Stages of Desire,” just went to contract with Kensington/Lyrical and will hopefully be released by the end of the year. It’s set in London during the Regency era and I can’t wait to share it with everyone.

Thanks so much for being here today. It’s been a real pleasure. I’m so excited for you and A Question of Class!

And thank you for being such an inspiration to all your fellow authors and readers!

A Question of Class can be picked up here

And Julia can be reached here: