Don’t you love that post title? Well I can’t take credit because today I’m delighted to have a friend and fellow CR author, the super talented Liv Rancourt here on ye old blog to talk about something new and exciting she’s up to. And with True Blood starting for the summer, what a perfect time to talk about Vampires, don’t you agree? Take it away Liv!

Thanks so much for having me as your guest, Kwana! I’m very happy to be here.

Something about the summer months just squeals “vampire” to me, which is actually kind of funny, since I live in Seattle where, at this time of year, the sun doesn’t set till ten o’clock at night.

It can be pretty limiting for a vampire.

Maybe it’s the annual onset of True Blood that does it, though even before that, Charlaine Harris released a new book every May, setting us all up for a summer of vampire adventures. Either way, at this time of year, I’m all about the undead.

So when I signed on for the Summer Book Crush event, I offered my novella A Vampire’s Deadly Delight for sale. Just FYI, from 6/26 – 6/28, a bunch of authors have their books marked down to $0.99. Check HERE for the main sale site. 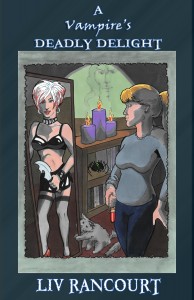 It’s all about the summer crush angle, and every book has a hero who’s definitely crush-worthy. Deadly Delight has two! Kristen’s an ordinary bookstore owner who becomes the hostess for a vampire-slaying djin named Jai. As soon as she smells vampire – dead meat left too long in the cupboard with some dirt and paprika mixed in – Kristen turns into Jai, and mayhem ensues – for the vampire, anyway. It’s all a lot of fun until they run into the one vampire Jai can’t kill.

Sir John’s been around four hundred or so years, and he’s played dangerously hot games with Jai for longer than any of us can remember. The problem is, she can’t remember anything before she (literally) moved in with Kristen. She senses his incredible power and her body responds to his blonde-god good looks, but bringing her back to herself is a true test of his love and loyalty.

In the meantime, Kristen finally goes on a date with someone who gets her. Corey’s her age and has a pulse. He’s the kind of guy who shaves his whole head to cover a receding hairline, and though it takes her a while to convince him she’d rather communicate in person instead of via text messages and email, they laugh at the same things, which will carry you pretty far.

In the end, Kristen has to choose between continuing as Jai’s hostess or taking on a real-life role as Corey’s girlfriend. She could have a little vicarious lovin’ with a seriously hot vampire, or see what it’s like to play house with an actual man.

You know I’m not going to give it away here, so you’ll have to read the story to see which one she chooses. But what about you? Would you rather entertain an ageless, incredibly handsome undead lover, or date a guy who’d throw on a pair of hiking boots and take you up the trail? Do you dream about the kind of man who drives a black Volvo with leather interior, or the one driving a late-model Jeep Cherokee with a roof rack for bikes?

I know which one I’d choose.

Okay, I know me and I’d take the Volvo over the hike. I’m comfort all the way. LOL. Thanks so much for being here Liv what great fun! 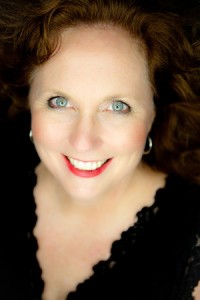 Liv Rancourt writes paranormal and romance, often at the same time. She lives with her husband, two teenagers, two cats and one wayward puppy. She likes to create stories that have happy endings, and finds it is a good way to balance her other job in the neonatal intensive care unit. Liv can be found on-line at her website & blog (www.livrancourt.com), on Facebook (www.facebook.com/liv.rancourt), or on Twitter (www.twitter.com/LivRancourt).