Hey there lovelies. It’s a great day at ye old blog today because we have with us my fellow Crimson writing sister, Becky Flade here to tell us about her spanking new release from Crimson Romance: Fated Souls. Just released on Monday, April 15, right in time to perk you up after those pesky taxes.

Here is a bit about Fated Souls: Investigative journalist Maggie O’Connell went from hard hitting exposés to alien abductions in the blink of an eye, but she did it with style. Her next big lead takes her to northern Minnesota hot on the trail of a werewolf and straight into the arms of Aidan Gael, a horse rancher with way more secrets than he has friends. Maggie may get the story but the man who shares the wolf’s compelling green eyes may end up with her heart – provided they can keep each other alive. 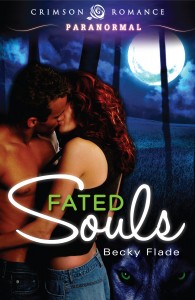 KMJ: Wow Aliens, werewolves, oh my! It all sound pretty fantastic what got you into writing paranormal romance?

BF: I have a seriously over-active imagination and three brothers. I sat through every horror, sci-fi, superhero, mutant, alien invasion movie, television show, cartoon, you name it, that you can imagine growing up; the majority ruled. We did not watch a lot of pretty little pony and princesses at our house as kids. Ha! And I’d put my own spin on things. What can I say…I like football, a really cold beer and the supernatural.  I’ll take Batman over Carrie “what’s her name in the city” any day of the week and twice on Sunday.

KMJ: Have you always been a fan of romance? When did you first fall for the genre?

BF:  Yes, always a fan of the genre. I’m a hopeless romantic thru and thru! I still have the first Harlequin Presents I read. My mom tells this story of me as a toddler playing on the floor as she was watching Barbra Streisand’s “Funny Girl” and at the end of the movie I burst into tears. She scooped me up and I wailed, “She loves him and he doesn’t love her!” It probably started then.

KMJ: So you have your pick: an alien, a werewolf or a rancher and they are all hot, which one do you choose?

BF:  In this post-Patriot Act environment the poor little hot alien would have mean-Mulder after him 24/7 and I’m sorry but I’m a homebody, a nester, I need a guy that can settle down.  And as for the werewolf, well frankly, I live in the city; we have leash laws….need I say more? Well, hold on, he’s hot, there’s a leash, hmmmmm…. No, no, scoop laws too that is not sexy no matter how you phrase it.  Rancher.  Definitely the rancher.

KMJ: Good pick!  Tell us a bit about your writing process are you a plotter or a pantser or a little bit of both?

BF: I’m a little bit of both.  When I start I have a very good idea of what’s going to happen when and where, some might even refer to it as a plot. But I’ve never had a story go where I thought it would.  Fated Souls started as a short, comic piece and that little scene is smack in the middle of the book.

KMJ:  And now for my favorite question, can you tell us the story of your ‘overnight’ success?

BF: One of my brothers recommended I get on Twitter because an actor we both enjoy is ‘actually really funny.’ I was home from work with my youngest who was sick with the flu, messing around online while she was napping, bored. I remembered what my brother said and went on Twitter to check out that actor’s Tweets and I saw that Crimson Romance was accepting tweet pitches. I figured it would be a good opportunity to network and treated it like a writing assignment.  You could have knocked me over with a feather when they contracted Fated Souls.  That was January of this year.

KMJ:  What can we expect next from you?

BF: I’m currently working on a contemporary romance about would-be high school sweethearts that get a chance at love nearly twenty years later.

KMJ: That sounds lovely. Now please tell us, where can our readers pick up Fated Souls and find you on the web?

Fated Souls is available at www.crimsonromance.com and everywhere E-books are sold.  It will also be available Print-On-Demand later this year. And you can find me on my blog, Facebook or Twitter.

You can also pick up Fated Souls on Amazon here

Thanks so much for being here today. It was a real treat!

I loved it! Thanks for having me. 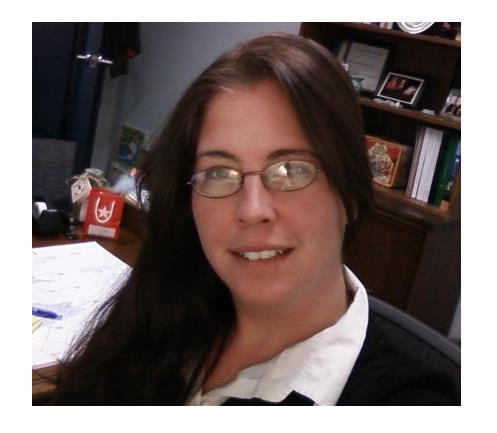