Howdy folks, today I’d like to welcome another fantastic Crimson Romance author, Becky Lower to ye old blog. Becky has written a fantastic historical (you know how I love my historicals!) called THE RELUCTANT DEBUTANT. 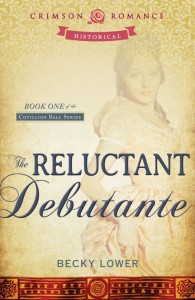 Before we get to the questions here is a bit about THE RELUCTANT DEBUTANTE:

In 1855 New York, Ginger Fitzpatrick has absolutely no interest in taking part in the newest rage in America – the Cotillion Ball. Instead, Ginger would rather be rallying for women’s rights – at least until she meets her brother’s best friend from St. Louis, a dark mysterious man named Joseph Lafontaine, who ignites her passion and makes her question if love and marriage is such a ridiculous notion after all.

What she and the rest of New York’s high society don’t realize is that Joseph is half Ojibwa Indian, and therefore, totally unsuitable for marriage to a fine, cultured young lady.

In this Edith Wharton meets Julia Quinn tale, a young woman rebels against high society and opts for a life in which she creates her own set of rules.

Welcome Becky! Thanks for being here today.

Thanks, Kwana. I’m honored to be your guest.

Firstly I love that your book is written in 1855 high society. What made you go back there?

I love Regency romances. Gobble them up. Julia Quinn is an all-time favorite, as is Tessa Dare, Lisa Klepas and Stephanie Laurens, to name a few. I think I’ve exhausted all the Regency books in the library by now. The balls, the lavish gowns, the intrigue, the push to find a suitable partner, the Dukes—it’s all so rich and fascinating. But I’m a home-grown American girl, not interested in learning all the trappings and protocol of English society in the detail necessary to write decent Regencies. I wanted to learn more about my own country. My “Aha” moment happened when I heard about a young ice skater, definitely an over-achiever and someone who had wealthy parents willing to accommodate her various diversions. She skated at the highest international levels, was set to attend Harvard in the fall, and she had just made her debut into society at her Cotillion ball. I hadn’t thought about the Cotillion as an American tradition, but I had friends who went through it when they were teenagers, so I began pumping them for information. And doing my research.

The roots of the Cotillion as a way to introduce well-bred young ladies into society and to their potential husbands was imported to this country in 1854, the brainstorm of a relative of John Jacob Astor, Annie Schermerhorn. It began as a masquerade ball, but by 1855, had become de rigueur for all wealthy females of marriageable age. As I began to set my stage for the series, I discovered the decade leading up to the Civil War was chock full of historic events—more than enough to craft a series around. The war may not have begun until 1861, when shots were fired on Fort Sumter, but the fighting began many years prior to that. Not only was there the question of slavery, but also the fight for women’s rights was beginning. Amelia Bloomer livened up New York in 1855 with her protests in the streets. And there was the whole western expansion, with wagon trains departing from St. Joseph and St. Louis, MO every spring. It was an exciting time for our raw and wild country, and I’ve tried to portray the women and men who tamed it in an appropriate vein.

The more I dug, the more I found to enrich the story—not only for Ginger and Joseph in The Reluctant Debutante, but in my second book, The Abolitionist’s Secret, due out in December, through Crimson Romance. That book deals with the Underground Railroad in New York City and how one evening’s events changed the life of my heroine and hero forever. My current work in progress is set in St. Louis and details the wagon trains that originated from there every spring.

Have you always enjoyed historical romance?

I loved the Little House On The Prairie series when I was young. My first contest win, when I was 12, was about Tom Dooley’s hanging. And, I wrote a screenplay for Bonanza that same year, resulting in my first-ever rejection letter. I’ve already let you know I love Regencies. So, I guess the answer is, yes. I’m not that much of a cowboy person, but give me a fur trapper or a gold digger any day.

I enjoy a spirited heroine. Did you have a specific inspiration for Ginger?

I didn’t have one specific person in mind as inspiration for Ginger. I like to think of her as the embodiment of several people who were leaders in the feminist movement—a bit of Gloria Steinem, a bit of Muriel Siebert—the first woman to own a seat on the New York Stock Exchange, which didn’t happen until 1967, by the way, and maybe a bit of me.

Any advice for the budding historical writer?

Find a time period you’re passionate about and write the best story you can. You can also educate your reader while you’re telling your story, which is a hidden benefit of writing historicals. By weaving in bits of actual history into my stories, by plunking my characters down in the middle of the action as events that shaped our country unfolded, I like to show how these milestone events impacted the lives of everyday citizens. The movie “Titanic” showed the very real disaster through the eyes of Jack and Rose, two of many aboard ship during the voyage. The moviegoer walked out of the theater with a better understanding of the class structure adhered to on board ship, and how both Jack and Rose chafed against the boundaries imposed upon them by society. You can read about it in history books, but it doesn’t become alive until you see how it impacts the lives of everyday people. That’s what I’m trying to do with my books.

What can we look for next from you?

My next book is due out in December, also from Crimson Romance. It’s called The Abolitionist’s Secret and is the second in the Cotillion Ball Series. It’s about Ginger’s younger sister, Heather, who unintentionally becomes an abolitionist when she helps a slave escape the clutches of the slavemongers chasing her. Freedom of all slaves then becomes her passion, which puts her in conflict with her beloved’s way of life, since he is from a southern plantation.

Where can we find you on the web?

My website and blog can be found at http://www.beckylowerauthor.com/index.html

Thanks so much for being here. It was pleasure.

Thanks for hosting me. It’s been fun. Great questions.