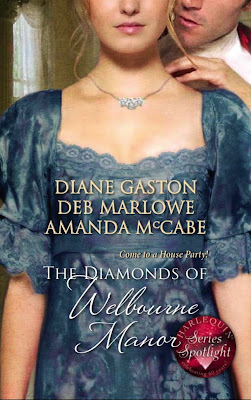 What’s Jack up to? Well, as I write this Jack is curled up on the couch sleeping ever so sweetly. One would never know that he got in the trash today and made quite a little mess. Nah. He’s an innocent little sweetie. Oh, yes he is.

It’s been way too long since I’ve had an author interview on the blog and today we’ve got a special treat. Not 1, not 2, but 3 fab writers on KwanaWrites. Yay!

Today in honor of the release of The Diamonds of Welbourne Manor, an exciting new Regency anthology, we have Diane Gaston, Amanda McCabe and Deb Marlowe the authors. I’d like to welcome them to the blog for a little Q and A.

First off please tell us how the idea of the anthology came about and a little about the process?

DEB: Well, the anthology was actually Harlequin’s idea! Maddie Rowe took us out to a fabulous dinner at RWA and offered us a chance at it, and amazingly, the chance to develop the theme/idea all on our own. Since we don’t live close enough to each other, we met in Williamsburg, VA to plot and plan and shop and tour—and the scandalous Fitzmannings were born! We had a great time and then we went home and about a million emails ensued!

DIANE: As I remember it, after being immersed in history at Colonial Williamsburg, we came back to Deb’s hotel room and started thinking about scandalous Dukes. When we decided to have a family consisting of the Duke’s illegitimate children, I knew immediately who I wanted my hero to be. I think we all had the same experience of knowing instantly who our characters would be.

AMANDA: Williamsburg was definitely a good setting for brainstorming! I’ve never, ever worked on a collaborative project before! Since I’m such a pantser (my stories have a tendency to switch gears halfway through as I follow new pathways!) I wasn’t sure how it would all work. But this went so very smoothly—maybe because we knew each other already…

Now please tell a bit about each of your individual stories.

DIANE: Justine and the Noble Viscount was planned as the first story in the anthology, the one that sets up the others. The whole anthology begins with my hero, Gerald Brenner, showing up on the doorstep of Welbourne Manor. He has been given the role of guardian to his mother’s other children, the Duke’s illegitimate children, half-siblings he has never met and has resented his whole life. Nothing goes as he plans, especially when the Duke’s other illegitimate daughter, Justine, calls powerfully to something deep within him.

DEB: In Annalise and the Scandalous Rake, we meet the most retiring Fitzmanning. Annalise would rather hide in her studio than face society’s censure. She is satisfied pouring her emotions into her paintings until Mr. Ned Milford is invited to a Welbourne house party. Unfortunately, she has no idea he is actually Prattle, a famous caricaturist bent on exposing her family’s secrets. There are many obstacles in their path to love, including a pompous suitor, a slightly scandalous scavenger hunt, exposure to society’s scorn and a devastating artistic duel! I hope readers enjoy it as much as I did!

AMANDA: Charlotte from Charlotte and the Wicked Lord is the youngest Fitzmanning sister, sort of the “wild child” of the family (which is saying a lot!). She’s a writer, a free spirit, who loves being out in nature. But she’s always loved Lord Andrew Bassington. Drew has left behind his own wild past to take care of his widowed sister-in-law and nephew, and he needs a very proper bride. Proper is one thing Charlotte has never been, but she’s determined to make him see how perfect they are for each other—no matter what it takes.

You are all lovers of the Regency. What is it about that time period that has you so captured?

DIANE: First of all, I think the Regency is a time period that is accessible to the modern reader. We can imagine ourselves living in it. At the same time, it is distant enough to give us that feeling of being swept away. Secondly, the era is one of great beauty: elegant fashion, houses, gardens, carriages. Mostly, though, I think the era is one of great drama. The war with Napoleon. The transition from the decadent Georgian era to the repressive Victorian one. Social change in the rise of the middle classes and the decline of the super rich aristocracy. The dawn of technology. The drama of the era gave rise to literary masterpieces from Byron, Shelley, Keats, Austen, Wordsworth, Blake. The era produced beautiful music from Beethoven Rossini, Schubert, and Liszt. Artists included Lawrence, Turner, David, and Constable. Because of this I believe there are endless stories to tell from the Regency era. I can’t wait to write some of them!

DEB: So many larger than life characters walk through the pages of history in this period. So many forces of nature are at work. Think about it—these are the people who span the gap between the wild and wonderful Georgians and the stiff Victorians. They are dealing with war and economical unease and rapid technological advances, just like we are. Fascinating stuff!

AMANDA: I admit, when I first started Regencies as a kid I was first drawn to the clothes! They’re gorgeous and comparatively comfortable, and go with all the beautiful aesthetics of the Neoclassical style. But then I read more non-fiction of the period, and was pulled into the arts and politics and personalities (especially the strong women!) of the era. For such a short period of time, it’s so rich in interest and upheaval. What’s not to love?!

As a final question, I know you are all good friends, tell me something fun about the other 2 women that I might not know. I know I’m bad! 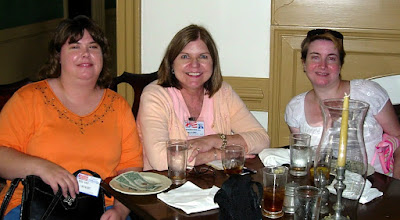 DIANE: Amanda was my mentor! Shortly after she sold to Signet, she signed up to be a Beau Monde mentor and I was her first mentee. It turned out to be a great way for us to become friends and led to us rooming together on the 2003 Novel Explorations Regency Tour where we became friends with Deb.
Deb has the most wonderful laugh. It is infectious and I love to hear it. When she sold to Harlequin Historical and joined the author loop, I welcomed “Deb Marlowe,” not realizing I was welcoming my 2003 travel buddy!

DEB: Hmm, well, Diane has more research books than my local library! If you ever want to know anything at all, she has a book for it! And Amanda has the most amazing collection of adorable, hand-made costumes. I’m always breathless at the Beau Monde Soiree, waiting to see who she will transform into next!

AMANDA: LOL! Last year it was Cherubino; this year, maybe Marie Antoinette.
Well, Diane loves cats as much as I do! And she has a mega-cool talking Leonidas action figure from 300. Deb has a kick-ass sense of humor—try and sit by her in the bar at RWA, you will have a blast!
It’s been too much fun, and a great privilege, to work on this project with them! 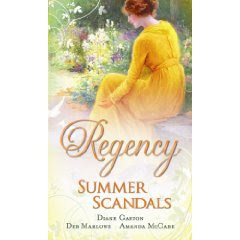 Thanks so much for being here today. I can’t wait to read it for myself being a big time Regency fan.

Please leave a comment by Friday at midnight and one lucky commenter will win a copy of the new anthology.