What’s Jack up to? Jack’s full of energy this morning. Running from one side of the bed to the other, all ready for a brisk walk in the cold air. Oh, Jack it was a late night last night I’m tired.
Did you watch the debate last night or are you over all this yet and you watched the New Real Housewives of Atlanta? I’m not going to hate. I DVR’d it and will be watching that un-beweavable hot mess asap. I saw the preview and those lades make the Real Housewives of New York look like paupers. 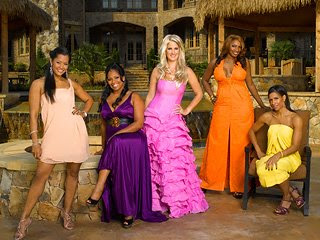 But that’s not what I’m talking about today. Today is about last night. I went to sleep not knowing what I’d write about, but woke up still annoyed with one thought on my mind. That one. It really got under my skin when McCain had the nerve to say “That one” in reference to Barack Obama last night. In what context is that ok? In reference to a cup, a book, the fifth grandchild from the left, but not in reference to a Senator and candidate for President of the United States. 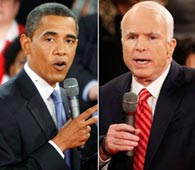 As soon as it was out I was taken aback. His low talking, condescending, “My Friend” way just gets gets under my skin. And how do you assume that the person who asked you a question about the failed economy doesn’t know what Fannie Mae and Freddie Mac is? And you call the other guy the elitist? Pla-ease
All in all, once again there was no knock out, but another quiet win for the Obama camp. According to the early polls. CNN tracks it at 54 Obama and 3o McCain and the rest saying “Uh what?”
What say you about last night? You know what I say.
Sidebar:Funniest laugh from this morning. Joe Biden was on The Today Show doing his job and giving a shout out for his candidate. At the end of the interview Ann Curry said that Sarah Palin was invited to come on but declined. No surprise there. I made a comment to the DH about Sarah hiding and she should be doing her job and commenting on the debate.
Deadpan he says to me. “Maybe she didn’t watch.”
Ha! Who knows? Real Housewives of Atlanta was on!
Project Runway Tonight! Yippee.
Best,
Kwana