What’s Jack up to? Poor Jack is as stinky as he can be so I guess he’ll be getting wet today when I dunk his dirty butt in a bath. Oh the fun. Not! 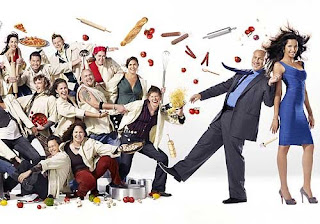 So here I am blogging Top Chef one more time. It’s The Reunion show
Whoo Hoo! Here it is as I’m thinking it.

Gail’s covered. Tom’s in a vest- I likie. Padma’s looking like Padma and Ted’s there. Yay!
No Richard because it was taped when his wife was giving birth. Aww.

Loving Dale’s body language. He is so not into being there and the show is just beginning.

Stephanie is using the money to open another restaurant in Chicago. She will be a powerhouse.
The talk of Mark and Spike’s Bromance was just icky. And Dale and Richard? Andrew and Spike? That Spike just gets around. And Can I say how I can’t stand the word Bromance. Like I hate the term Baby bump. But I love Andrew. He’s just crazy.

Marks of the market. He got married to an American. Hmm.

Oh Snap! Internet rumor blow up. Zoi and Jen totally broke up, but don’t want t admit it on TV. I guess couples will think twice before signing up to compete on TC the next time. Must find out what happened. I suspect someone cheated and Zoi is was too defensive.

Who will win fan favorite and why are they suggesting Spike? Pla-ease. Spare me.

Love the idea of The Stew Room and what the judges do during that time. So funny.

Dale talk. Yes! Tom disagreed with the decision. Dale was a big man though. I still heart him.
Lisa’s scowl. Yech! Ha, Lisa got dirty looks at a lesbian party. Too funny. I love that. 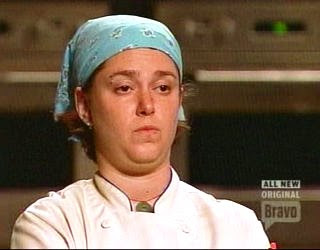 Best of Andrew. ADD. Advanced Dungeons and Dragons. Great! You know he could win fan favorite and I wouldn’t be surprised. And Andrew’s “Culinary Boner” line won the t-shirt contest this year.

Hey it’s Richard via satellite with a sort-a-hawk? You can tell he was up all night. He’s opening another restaurant. See I knew he was going to be fine.

Now for fan favorite…. And it’s… wait Tom just dissed Lisa and said it won’t be her. I can’t stop laughing. Ha. That is too mean. I want to see the mush face again. David Dust are you out there?

Ok now to fan favorite. It’s… Stephanie!! All around a great year for the super woman. 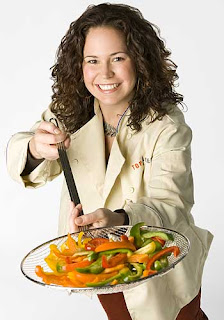 PS: Scroll down for a fun book review video. We should all be so lucky.