Tis the season and timing could not be more perfect for today’s author interview. I’m so excited to have my friend the super talented Stacey Agdern on ye old blog today to talk about her contribution to BURNING BRIGHT the new Chanukah Anthology out from Avon Impulse.

Thanks so much for being here today Stacey!

Thank you so much for having me. It means a great deal *hug*

First off can you tell us a bit about BURNING BRIGHT? How did this anthology come together?

I pitched a single title Chanukah story to an editor at a luncheon hosted by one of the two RWA chapters I belong to (waves to LIRW). Two months later, I was sitting with Tessa Woodward, hashing out how the anthology would work.  Chanukah. Jewish Characters. Jewish authors. An introduction by Sarah Wendell, and we were off to the races. I recruited Megan, Jennifer and KK , sobbing all over each of them with excitement and pride.  I couldn’t believe this was happening.  Neither could they (they also probably wanted me to stop crying;).

They came up with some really cool stuff, no?

This December, take a break from dreidel spinning, gelt winning, and latke eating to experience the joy of Chanukah. When you fall in love during the Festival of Lights, the world burns a whole lot brighter.

It’s definitely not love at first sight for Amanda and her cute but mysterious new neighbor, Ben. Can a Chanukah miracle show them that getting off on the wrong foot doesn’t mean they can’t walk the same road?

Lawyers in love, Shari Cohen and Evan Sonntag are happy together. But in a moment of doubt, he pushes her away—then soon realizes he made a huge mistake. To win her back, it might take something like a Chanukah miracle.

When impulsive interior designer Molly Baker-Stein barges into Jon Adelman’s apartment and his life intent on planning the best Chanukah party their building has ever seen, neither expects that together they just might discover a Home for Chanukah.

All Tamar expected from her Israel vacation was time to hang out with one of her besties and to act like a tourist, cheesy t-shirt and all, in her two favorite cities. She definitely was not expecting to fall for Avi, a handsome soldier who’s more than she ever dreamed

What inspired you to write your story?

Three different elements-two happy and one sad.  An anthology that never came to pass about characters celebrating thanksgiving in a New York apartment building (thank you Tamsin!), a Chanukah party that is becoming one of my favorite annual traditions( Latkepalooza)  and the death of my great aunt Bernice.  Mix them together with a bit of amazing New York food, and you have ‘A Home for Chanukah’.

This year especially diversity his caught on as a big word in romance and you have been a champion for more diversity in the genre. Tell us why is it so important to you and what does the word mean to you?

Diversity, to me, means a romance genre that reflects the world we live in.  Books telling the stories where the characters (and authors)  are of all races, sexualities and faiths.  Where readers can see themselves in the lead roles and not just in the secondary characters we hope (and pray) will eventually get their own books.

It’s important to me for many reasons, but the most relevant for this piece is the following : I want to live in a world where a character’s Judaism doesn’t disqualify them from having a leading role in a romance novel and an on the page romance.  I want there to be the possibility that the word ‘inspirational’ doesn’t mean Christian.  I don’t want someone else writing an article about Jewish characters in leading roles in romance novels to have to struggle, like I did, to find 8.

Also, can I say how lucky the romance community is to have you, Kwana?  You lay the groundwork for a diversity conversation that is genuinely inclusive of all types of diversity, whether it is based on race, sexuality or faith.  That is a priceless gift.

You are so kind to say that. Thank you and thank you once again for it and all you do.

Tell us a bit about your writing schedule. Are you a Plotter or a Pantser?

Mostly a pantser.  When I start to write I need: 1.my general direction 2.a bit of knowledge about my characters. 3. The beginnings of my playlist.  I don’t write in order either.  I’ll write a bunch of scenes, and when I get to the point where I feel I have a story, I’ll start putting everything in order and filling in the missing pieces.  I’m also not wedded to the beginning sequences; if I get to the point where one of the early scenes I’ve written is supposed to fit, but doesn’t, I’ve got no problem cutting it.

I’ll plot only when I get stuck, but only the barest minimum.  If I plot too much, I get stuck  Interesting fact : even if I write a synopsis before I write the book, I need to force myself to forget I’ve done this and proceed as usual.

What advice would you give other aspiring writers?

Pay attention to the market but write your stories.  Keep your eyes open and take the opportunities that come your way.  If you have a local rwa chapter, join.  And READ. Always.

Do you mind sharing with our nosy readers (ok me) what you are working on next?

I’m working on a few different things, one of which is a hockey romance.  “Icing the Puck’ comes out in April (no date yet) and it’s the second anthology of stories about the New York Empires hockey team.   My story in ‘Icing the Puck’ features a hockey playing renchman, a violin playing heroine, tutoring sessions that slowly become more, interesting family secrets and 4/5 New York City boroughs during the holidays 😉

Sounds fantastic! Thank you for sharing.

And now here’s a short excerpt from ‘A Home for Hanukkah that makes a bit of a reference to my fictional hockey team.  I love putting bits of afikomen-what most people call easter egg-references to other things.

She had more ideas in mind, but this was going to be his place when he got around to it, his idea. Which meant she had one more question to ask him. “Any colors?”

This was the one that seemed to catch him off guard. He shrugged his shoulders, then settled back in. “Don’t know,” he finally said, trailing off as he looked around the room. “Maybe blue, white. I’m an Empires fan.”

She tried to look interested, tried to muster a degree of understanding, at least.

He raised an eyebrow, as if to say that of everything they’d talked about, this was the thing he was most surprised about. “You’re not interested at all?”

She shook her head. “Sorry. Not really.”

Interesting *fun* fact?  The hero of my story in Icing the Puck?  Lucky seven, of course 😉

Thanks so much for being here today. It’s been a real pleasure. 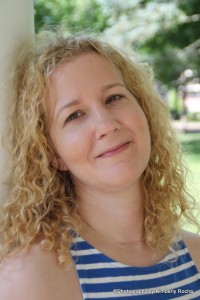 You can find Stacey at these locals on line:

And her pick up Burning Bright here: