Today on ye old blog I’m excited to spotlight the fantastic writing duo of Deborah O’Neill Cordes and Cary Morgan Frates known together as Morgan O’Neil and their Italian Time Travel Series. But you know me, since I had them here to spotlight their latest work I had to ask quick question or two:

So ladies, why time travel?  We love writing time travel because it gives us the opportunity to write epic and intricate timeswept adventures, which take place in the present and past.  We love weaving real historical events into our storylines, with our heroines and heroes interacting with an actual historical romantic couple. It is also interesting to write these novels from the perspective of a modern heroine (or the occasional “out of his time” hero), who must deal with the conflict and dangers inherent in surviving in another era.

Where and when will you be traveling next? Our next time travel series will be a journey to Elizabethan England, with the debut of The Thornless Rose in November of 2014, to be published by Entangled Publishing, LLC.

That sounds fantastic and thanks for the preview and now let’s check out your wonderful series that’s out NOW! 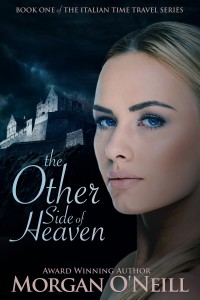 The Other Side of Heaven, Book One of the Italian Time Travel Series

Californian Gwendolyn Godwyn seeks to learn her family’s history and hopes to restore the bond that once existed between her Italian forebearers and those who live in America. While visiting her ancestral Italian town, Gwen is caught in a violent earthquake and inexplicably thrust through time. At first refusing to believe what has happened, she nevertheless uses her wits to survive, donning a monk’s cowl to hide her identity as a woman. Ripped apart from all she has ever known, Gwen finds herself in the midst of brutal territorial battles in an era she once blithely called “The Dark Ages.” When the golden Italian summer of 951 emerges from the strife and gloom, Gwen joins forces with a cadre of gallant men, allies in the struggle against the evil nobles, Willa of Tuscany and Count Berengar, kidnappers of Italy’s rightful queen, Adelaide. Along with Father Warinus and Lord Alberto Uzzo, Gwen seeks to rescue Adelaide and restore her kingdom. In the midst of this great adventure, Gwen falls in love with the complex and passionate Alberto, to whom she reveals her identity as a woman. But can Alberto learn to love her strong and independent nature and help Gwen in her quest to discover her rightful place in time?

Through dark magic, Californian Gwendolyn Godwyn has been swept back in time to medieval Italy. There, she finds herself in the midst of a war between Italy’s rightful queen, Adelaide, and those who have kidnapped her and seek to usurp her crown. Risking her life, Gwen elects to play a pivotal role in the planned rescue. In the midst of the chaos, she is drawn to the queen’s champion, Lord Alberto Uzzo, who battles not only their military foes, but also his personal demons. Tested to the limit when he discovers Gwen’s true identity as a time traveler, Alberto nevertheless fights through his doubt and the whirl of superstition that surrounds this intriguing and strong-willed woman. Time is of the essence as the lovers seek to overcome the evil forces rallying against the queen they’ve vowed to save. Will Gwen and Alberto be able to overcome the groundswell of danger to find time enough for love?

“What an amazing adventure… These two books will have a very treasured place on my bookshelf.” ~ Review by Hitherandthee of Night Owl Reviews. Both novels were given Top Picks, 4.5 stars for The Other Side of Heaven, 5 stars for Time Enough for Love.

“Alberto and Gwen’s relationship was one of the most touching and heartfelt romances, that I’ve read in a long time.” ~ Review by Angela Searles, Satin Sheets Romance Reviews. 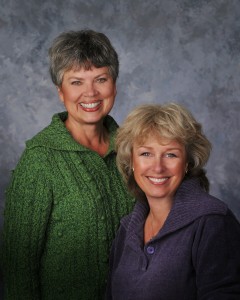 Two authors writing as one, Cary Morgan Frates and Deborah O’Neill Cordes specialize in recreating pivotal moments in history, epic adventure, and romance – with a time travel twist. They are the award-winning authors of the medieval Italian time travel duo, The Other Side of Heaven, and its sequel, Time Enough for Love, and the forthcoming Elizabethan time travel series, which will debut with The Thornless Rose, from Entangled Publishing, LLC, in November, 2014. They are also the authors of the Roman time travel series, which will be re-released in 2015.

The Other Side of Heaven and Time Enough For Love can be found in these locations on the web:

The Other Side of Heaven