Today, well tonight, depending on when you’re reading this I thought I’d put up a little Whistle Wetter just to give you a taste from a scene from BOUNCE my indie contemporary romance which I’m happy to say will soon be available in POD so check back for details on that real soon. Meanwhile here is a scene from BOUNCE… 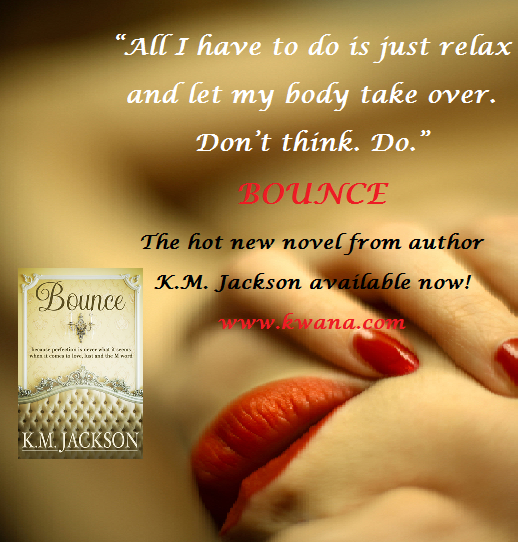 He reaches for me.

“Hey, I know you’re up. Don’t be mad, okay? I know I should have been home earlier or called,” he says in a sheepish voice.

“I’m not mad. I just would have liked to have had you here tonight.”

“Really?” His question is clear but still he goes on as if I really need him to dig any deeper. Pick at the scab. “Because it seems lately you don’t want me around. So what’s so different about tonight?” He moves back onto his own pillows and I’m suddenly chilled. Can’t tell if it’s his tone or the distance. But I know he’s right. Even when I want him around, I don’t really. I’ve become my own deserted island.

I sit up in the bed and turn to him. “Well, you know I missed most of Zach’s game. It was because I was in with Mr. Dunlap. Today he practically guaranteed that I’d be made partner at this year’s annual meeting. I wanted you here so I could share it with you.”

Sean sits upright in the bed and turns on the light. His smile is genuine and for the first time in a long time there is a softness and an easiness between us that is unplanned and unforced. He reaches out and hugs me and for a second I sink into him. His strength and his warmth – I’ve missed what this feels like. “Babe, that’s great. I know how much you wanted it.”

When I pull back and don’t respond Sean looks at me with questioning eyes. “This is what you wanted, right?”

I’m looking around trying to find something to focus on except Sean’s confusion. The blanket’s tone on tone pattern takes on a new fascination. “Bree?” Sean asks, pulling me back to his question. “This is what you wanted?”

“Yeah, I guess, well, I don’t know,” I mumble, suddenly embarrassed at how weak I sound.

Sean lets out a long breath and sits up straighter. “You don’t know? Bree, I don’t understand you. It seems that nothing is satisfying to you lately. Not even the promotion you said you wanted for so long. The one you worked so hard for.” He rakes his hands through his short tight curls. “I thought things were fine. I thought things were going good again.” His voice grows louder as he goes on and a breathless anxiety comes over me. Threatening my edgy nerves. Hell, I thought I was all right too. At least it’s what I always tell myself. Speaking is half of believing right? But judging by the constant knots in my stomach, things are just not all right.

I give Sean a weak smile and pull him towards me. I kiss him deeply. And I can feel the immediate surprise course though his body. But the surprise doesn’t stop him and it doesn’t take much to get him going. He instantly falls into action, running his large hands up and down my back. Kissing my neck then trailing his tongue down toward my breasts.

Have you BOUNCED yet?