Sometimes, in this day, you don’t know what comes first: the tweet or the story. You see I’m not really sure if I became Twitter buds with today’s fantastic blog guest through Twitter first or if I became a crazy fan or her writing first, either way, no matter because I’m both. 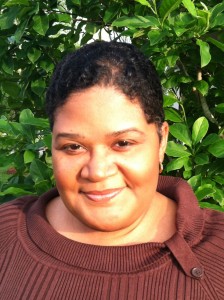 I’m so pleased to have on ye old blog today one of my favorite writers, Farrah Rochon. Farrah has written numerous romances for Harlequin including her now 2012 RITA nominated (Yay!) I’LL CATCH YOU, which is part of her sexy New York Saber series of books. And today she is here to talk about and give us a sneak peek at her new book debuting called THE REBOUND GUY.  (Love this cover!) 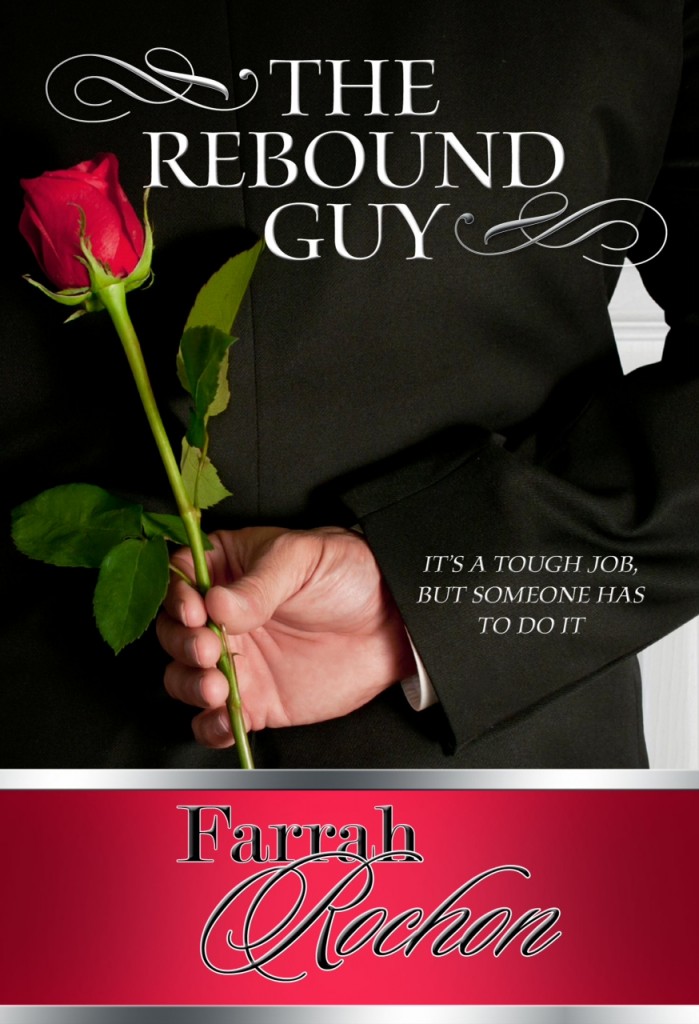 Thanks so much for being here Farrah. This is a real pleasure.

I love the fun premise of THE REBOUD GUY. Can you tell the blog readers about it?

THE REBOUND GUY features “relationship advisor” (aka, professional rebound guy), Dexter Bryant, who specializes in aiding women who have just ended long-term relationships. Not only does Dexter strive to help women deal with those post-relationship woes, but he also sees himself as saving unsuspecting men from getting their hearts trampled on by women on the rebound. He’s so altruistic, isn’t he?

However, his newest client, Asia Carpenter, has Dex rethinking his choice of career. Asia hires him after being dumped by her fiancé, and after just a few weeks, Dex realizes that he doesn’t want to just be her rebound guy. He wants her permanently.

I think of THE REBOUND GUY as a cross between the movies “Hitch” and “The Wedding Planner,” two movies I absolutely love.

What made you decide to dip your toes into the self publishing waters with this one?

As you mentioned before, I write for Harlequin Kimani. I love being a part of the Harlequin family, but there are certain guidelines and restrictions associated with the line, and this story just never would have worked for them. I also love (and I mean LOVE) both the freedom and control that comes with self-publishing. Some may consider my professional rebound guy a bit unconventional and maybe even controversial (one of the “services” he provides just happens to take place between the sheets), but when this story came to me, I just knew I had to write it. There was something empowering in knowing that I would be able to publish it without having to compromise. I’ve gotten great feedback from readers already, which tells me that I made the right decision in choosing to self-publish Dexter and Asia’s story.

Now how about that sneak peek?

THE REBOUND GUY – Chapter One

“Another late day at the office, Ms. Carpenter?”

“Another late one, Harmon.” Asia Carpenter waved good night to the doorman, who, as far as she knew, had never missed a night’s work in the six years she’d lived in a loft in this former 19th-century brewery in Manhattan’s historic Kips Bay neighborhood.

“This is the last time you get home after ten o’clock,” Asia murmured as she bypassed the bank of shiny brass mailboxes, heading straight for the elevator. Her finger hovered over the “up” button for just a second before she pivoted and walked back to her mailbox. She knew Cortland, her fiancé, hadn’t picked up the mail. Two years of living together and he had yet to have his mail forwarded from the apartment he’d shared with his old college roommate on the Upper West Side.

Asia thumbed through the junk mail as she walked back to the elevator, dumping it all in the brushed stainless steel waste receptacle before stepping into the empty car paneled with Scandinavian-blond wood. As she got off on the fifth floor, she whispered a silent “thank you” that she’d had the elevator to herself the entire ride up. She was too tired for idle chitchat with neighbors she still only knew by face. She’d learn their names eventually. If she ever found time to strike up a conversation instead of just offering a passing wave while striding through the lobby, that is.

She slipped out of her gray pumps before she even unlocked the door to her three-level loft apartment. Holding both shoes in one hand, she eased on the dimmer switch in the entryway so she would have just enough light to cross the kitchen to the lower set of steep, yacht-style stairs.

“Cortland?” Asia whispered, not wanting to wake him if he was already asleep in the open bedroom directly above her.

She tripped over something on the floor and grabbed the back of a barstool to break her fall, dropping her Italian glove-leather suitcase. She looked down to find the light-blue and dark-brown throw pillow that usually sat on Cortland’s armchair.

Asia dashed up the six steep wooden treads to the high-ceilinged living room and turned on a lamp.

“Cortland!” Asia yelled. She turned and looked up to the open bedroom loft, but he wasn’t there. An eerie sensation traveled up her spine as she carefully navigated the tricky stairs down and walked through the tiny kitchen to the bathroom between the refrigerator and the entryway. She knocked before opening the door.

He wasn’t in there, either.

From the living room, she would be able to see all three levels of the small loft. Wrapping an arm around her waist to quell the sudden nausea swimming in her stomach, Asia trudged back there, slipping her personal cell phone from her jacket pocket so she could call to report the break-in.

Her eyes slowly scanned the space, trying to spot what else had been taken. All three levels of the apartment were visible from this vantage point.

Up in the bedroom, some of the sliding doors in the wall of closets were open, but she couldn’t tell whether anything had been touched inside. Down in the kitchen, in the wine cooler in which she kept her very best French and Australian wines, the racks were conspicuously empty.

A thief with a taste for the world’s finest wines. Lovely.

Asia was about to call the police when she caught sight of something on the reclaimed oak wine barrel that served as an end table next to her sofa.

For a moment she just stared at the three keys: one for the front door, one for the deadbolt, and a smaller one for the mailbox downstairs. Underneath them lay a sheet from the notepad she kept next to the phone. Her fingers shaking, she gingerly slipped the paper from underneath the keys and read the words scribbled in Cortland’s bold handwriting.

Look me up when you have more time for me.

The blue note dropped from her fingers onto the hardwood floor. Asia picked up a second piece of paper from the table.

It took a moment to register what she was looking at. It was an invoice with the balance owed to the jewelry store where she’d picked out her engagement ring. $8,283.14.

Her eyes slid shut. A heavy dose of guilt joined the unease churning in her gut.

Suddenly, she understood what this was about. Cortland had planned a dinner for the four-year anniversary of their first date. She hadn’t forgotten about the dinner, but she had forgotten to call to tell him she wouldn’t be able to make it.

His anger was expected, maybe even warranted. But going through the trouble of dismounting the television?

“That’s a tad dramatic, Cortland,” Asia murmured as she hit the speed dial for his number. The call went straight to voicemail. She immediately redialed, pulling the hem of her silk blouse from her slacks as she climbed the second set of stairs to her bedroom.

“Pick up the phone, Cortland,” Asia said to his voicemail, straightening the black and white photograph of the chateau at Inglenook Estates in Napa that hung above the whitewashed wood bureau in her bedroom. “I know we had plans, but I got tied up at work. I’m sorry.”

As if her words had summoned it, her work phone vibrated in her pocket.

She pitched her head back and massaged the bridge of her nose as she listened to the person on the other end of the line.

“Tell me you’re kidding,” Asia said, though she knew it was no joke. “I’ll be there in twenty minutes. Try to keep the camera crews away by any means within the law.”

The chime signaling a text message bubbled up from her personal phone.

Asia stared up at the ceiling and pinched the bridge of her nose. If she had a moment to throw a fit over Cortland’s departure she would, but spare moments were like snowstorms in July: nonexistent. She’d smooth things over with him tomorrow. Right now she had to deal with a reckless, trust-fund troublemaker with too much money and too much time on his hands for her peace of mind.

Tucking her shirt back into her pants as she made her way down the stairs, she grabbed her purse and lifted an apple from the small scale replica of a grape bushel basket on the kitchen counter. This would have to be dinner tonight. She grabbed a second apple for Harmon and locked the door behind her.

Read the rest of the first chapter: https://sites.google.com/site/farrahrochon/books/the-rebound-guy

Thanks once again. That was great!

Farrah is running a special $0.99 introductory price on THE REBOUND GUY for the next week, so if you want to try her work, this would be the time (I’ve got my copy). And, because THE REBOUND GUY is at such a great deal, instead of offering a copy of it as a prize, Farrah is offering one lucky commenter an autographed copy of one of her backlist books (including that RITA nominee or her hard-to-find out-of-print Holmes Brothers books), so please make a comment and I will draw a winner by Monday. Best of luck!

You can find Farrah at her site here: https://sites.google.com/site/farrahrochon/