Part of me feels like I should be chained to my writing desk and not let up until I come away with a book. That is no less than 80,000 words seamed together so they make at least enough sense to have crafted a usable story.  Not likely. You’ll realize this once you read this rambling post.

At this point that I feel nothing less than drastic measures will do in order to make this happen.

I was having coffee with a friend after dropping the dd at dance class and going over the woes of being a mother of seniors preparing for (hopefully please god) college and all the angst that entails and then she asked me the dreaded question: How’s your writing going?

Writing? What writing? If by writing you mean the meager few sentences I can eek out in between nail biting, fights, stress, tossing and turning, shifting mail piles from one side of the dining table to the other, if you are talking about those two sentence, well, they are coming along just fine.  At the pace I’m going I should be able to get this book done by the time somebody has a Master’s degree.

Then with me and my writers mind I got to talking about the Chilean Miners and how I cried and thought it was such a miracle when they came out of the mine but how also part of me wanted to hop in that little capsule after the last rescue worker and go on down myself, disable that sucker and tell folks to send down a laptop, tuna and water through a tube and come back for me in three months.  Make it 6-8 when the whole college process is over.

In my mind I imagined along with the cheering crowds when I emerged from the mine it would be so nice to have an acceptance guy from  which ever esteemed institutions gets Little Twin A and Little Twin B standing with them side by side to greet me. Ah bliss.

While I’m dreaming it would be nice to have my agent there when I get out along with a publisher or two waiting for the wonderful book I wrote while in the mine and a done deal one top of that from one of the publishers that were so enthusiastic to read my YA full when the queries were first sent but are now cooling their heels like a guy waiting to see if a hotter looking girl comes along.

And then there will be the DH. No worries hon there won’t be any rivals at the top of the mine to give you a fight for my affections. All my love is for you. Though it would be nice to have some new admirers with some Kwana Mania signs since I was down in the mine for months and on the Skinny Mine Tube Food diet and now no doubt coming up svelte, richer and wearing cool new shades. Just for my ego you know.

Although for that to happen I will have to style my underground camera shots like I’m Rachel Zoe. Very Carefully.  Hmm. 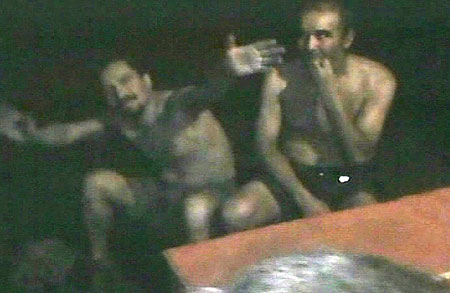 So now somewhere in my little coffee chat mine rant my friend’s eyes may have glazed over a bit and yeah, maybe she’s looking at me like I’m a little odd.  But she doesn’t have twins doing college apps right now (that’s next year for her) so for now I’m still keeping one eye open for possible wells I can slip into.