So are you snowed in? Raise your hands if you are?
Lucky me! The mail gods and ARC gods have been smiling and in a recent book shipment I received a copy of To Sin With A Scoundrel by Cara Elliot, the first book in the Circle of Sin series. Now once again I was duped buy the old author name change switcharoo. I was like, “where have I heard that name before.” You all know me. Between the Teen Twins and Jack I can’t remember two days ago and surely not when a friend goes and writes under a pseudonym. Foul!

Cara got me with this on twitter too. I was like, “who is this Cara all over the place.” Turns out it’s my friend and bestselling author, Andrea. Duh! I really gotta get it together. Maybe ginkgo biloba, but I do vaguely remember hearing about a study saying that that doesn’t even work. Sigh. Oh well, back to today’s joy…
I got To Sin With A Scoundrel, read it, totally enjoyed it and then saw the lovely Cara/Andrea at Lady Jane’s Salon recently and she ever so kindly agreed to do a short interview with me (even though I’m a ninny that can’t remember her very famous pseudonym).

Now onto the interview:

Hello Cara thanks so much for taking some time out of your busy schedule to pop over her for a bit at Kwana Writes!

Thanks for inviting me, Kwana. You’re such a wonderful voice for the romance genre—it’s an honor to be here!

First off can you tell us a little about your background? Have you always wanted to be a romance writer or is this something that you happened on later? Do you have some fab story of “overnight success”?

Actually, I wrote my first book when I was five years old. It was a Western, complete with meticulously colored pictures of horses and cowboys. (I’ve since moved on to Regency England . . . I must have a thing for Men in Boots!) So I guess that storytelling has always been a passion of mine. However, I also loved art and ended up majoring in graphic design, which took me on a different career path for a number of years, So to make a long story short, I remained an avid reader, but didn’t return to writing until later in life. One day, about ten years ago, I decided to plunk my derriere in a chair and try my hand at writing again. And that was it—I was hooked, though I hadn’t the first clue on what I was going to do with the finished manuscript.

Getting published was a serendipitous quirk of fate. A friend introduced me to an agent and I pitched him a contemporary thriller I had written. (It’s still in a desk drawer for good reason.) He nodded politely throughout the interview and said he would take a look at it. Then, as we got up, I mentioned as an afterthought,” Oh, I also have a Regency romance, but that probably doesn’t interest you.” Well, at that his eyes lit up, and he said,” Oh, the people at the Signet Regency line are good friends. Let me show it to them.” Three days later I got the call that they had bought my book!
What’s your writing process like? Are you a plotter or a pantser? What’s a typical writing day like for you?

Oh, total set-of-the-panser! I can’t tell you how many times I finish a chapter and sit back saying, “Whoa, I didn’t know they were going to do that!”
I’m also a slow writer. On my writing days, I get up early and pretty much keep at it for 10 or12 hours (Okay, okay, with bathroom and chocolate breaks. Chocolate is an essential item on a writer’s desk. One never knows when The Muse might need a little bribe!) If I end up with 8 or 10 pages, that’s a very good day. The good news is, they are pretty clean pages. I’m not someone who writes three or four drafts.

Now I know your schedule is extremely busy since you are currently teaching a class at Yale (yes folks, that Yale) called “Reading the Historical Romance Novel” along with New York Times bestselling author Lauren Willing. Can you tell me a little on how this came about?

Mix two romance writers with several glasses of chardonnay . . .
Lauren and I are both Yale grads, and one evening at Lady Jane’s Salon in NYC we started talking about how romance should be treated as a serious genre of literature, and how we would structure a class. Laughing, we both said, “Oh, wouldn’t it be fun to teach a seminar at Yale on the subject.” But the laughter quickly died away as a simultaneous spark lit in our eyes . . and so we decided to submit a proposal. After months of drafting a detailed syllabus, complete with critical readings, and being interviewed by a committee of students and professors in New Haven, our idea was accepted! We started teaching in January, and are really enjoying the experience.

It’s actually great to see that we are part of a growing movement to focus attention on the fact that great authors are writing great stories in the romance genre. Now, we readers have always known that, but it’s heartening to see the rest of the literary world, as well as the academic community, start to sit up and take notice!
Now onto To Sin With A Scoundrel which as I said I thoroughly enjoyed. Lady Ciara Sheffield is not your typical Regency heroine. She’s been married and has a child and is an intellectual. What made you decide on this type of heroine and the Circle of Sin as an idea for a series?
I’ve always liked creating unconventional heroines . . . maybe because I’ve always been a little quirky myself. So I tend to write stories with characters who dare to be different and who challenge the rules of their Society. It allows me to explore an emotional complexity, which I feel allows me to add depth and texture.
The Circle of Sin is a group of brilliant, beautiful female scholars who meet each week to share their knowledge and their friendship. They are all scientists—now, don’t ask me why! I was absolutely hopeless in math or science in school. (But hey, that’s part of the fun of fiction, and I did do my homework studying up on the basics so as not to make a fool of myself.) That said, I really enjoyed playing with the “chemistry” of pairing each of the three brainy heroines with heroes who were, on the surface, their opposites. Lady Ciara Sheffield, who stars in the first book of the new trilogy, is wary of men, however she has no choice but to accept help from a rakish rogue in order to save herself from scandal . . . and they both learn some unexpected lessons on love.
What was your inspiration for the dashing and sexy Lord Hadley?
Oh, I have a real soft spot for Lucas, who is one of my favorite heroes. He’s a charming rake who cheerfully admits to having no interest in anything but sybaritic pleasure. But at heart, he’s far more sensitive than he cares to admit, and as his best friend Jack says, he simply needs a challenge to bring out his better nature. As for inspiration, well, don’t we all dream of turning our scoundrels into noble heroes! 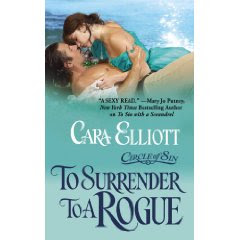 I can’t wait for the next book To Surrender A Rogue and Alessandra and Jack’s story. The sparks fly with these two from page one. Tell us a bit about them.

Oh yes, things get a little hot between Alessandra and Jack in To Sin With A Scoundrel. Having been burned in the past, she’s mistrustful of the handsome devil who tries to ride to her rescue—especially when Jack ends up tying her young daughter to a tree. (Note: he has an excellent reason for doing it, but still, what mother would not be a tad upset at such heavy-handed measures!)
So in To Surrender To A Rogue, when they find themselves working at the same archeological excavation of Roman ruins in Bath, they are none too happy about it. But when fellow member of the expedition threatens to dig up a dark secret from Alessandra’s past, she finds herself in desperate need of a hero . . . I hope you enjoy their story! (Oh, and then there’s free-spirited Kate, the botany expert, whose story will be told in To Tempt A Rake.)

Thanks so much for being here today. I can’t wait to see you at the next Lady Jane’s.

Thanks for having me, Kwana! See you at the Salon in March.

Folks you can check out Cara’s website here
And if you are in New York on Monday March 1st don’t miss Lady Jane’s Salon where Cara will be reading from To Sin With A Scoundrel. Check out the site here.
Oh and one lucky commenter will win a signed ARC (advanced reader copy) of To Sin With A Scoundrel from Cara. So please leave your comments. The only rule is you must be a follower of ye old blog kwanawrites. Oh and please leave your email so I can get back to ya and enter by midnight Thursday. Thanks.