What’s Jack up to? Enjoying his Saturday with a full house of folks to play with. 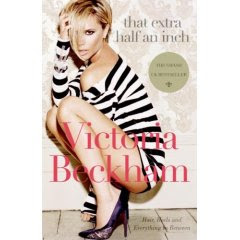 Confession time. Not this this will come as a shock to anyone who knows me and probably even those who don’t. I’m a pretty simple girl. I adore things like: realty TV, fried shrimp and chips, romantic comedies and a cold glass of White Zin. That’s me. A simple girl with a dream.

I also always really liked The Spice Girls. Scary was the spice for me and I still love her, even more actually, after Dancing With The Stars and making it through the whole Eddie Murphy fiasco. Ugh. Can you say, “baby papi drama?” As Christian would say, It was a big “Tranny” mess.

But the surprising Spice to grow on me, sort of like, cumin, is Ms. Posh aka Victoria Beckham.

Now, I liked Ms. Vic well enough, even with her scowling and the fact that she’s been known to hike the boobs way way up there sometimes. And I always thought her husband was a real cutie and admired the way she coordinated him perfectly with her stilettos and her Birkins. Come on. Wouldn’t you.

me over last year when she did an NBC reality special. During the special she had a meeting with Blogger/Gossiper Perez Hilton, who had been kinda trashing her. She decided to meet with him face to face which I thought was brave. Victoria stole my heart when Perez asked her if there was anyone in Hollywood that she didn’t like and she looked his straight on and said, Eddie Murpy! Yes. Way to stick up for your girlfriend. Girl Power!
I actually watched the special twice, I enjoyed it so much. Now, I’m happy to find out that Victoria will be doing a show for Fox. Yippee!

Heels and Everything In Between. In the book she gives important fashion and style advice like. “it’s worth spending more on your accessories as you’ll use them more than most of your clothes,” or “don’t buy anything too small for your figure. If you don’t like the size cut it out. ” Perfect.